Remember when South Park wasn’t going to tackle current events as much this season? Yeah, about that…

The gleefully irreverent cartoon came out guns (and tiki torches) blazing in Wednesday’s Season 21 (!) premiere, taking the not-so-funny “Unite the Right” protests in Charlottesville last month and spinning them into comedy by making them absolutely ridiculous. (You know, typical South Park.) 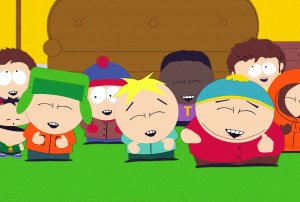 The premiere opens with the kids laughing their butts off by pranking their new Amazon Echo, asking Alexa to add “titty chips” and “smelly tampon boogers” to their shopping list, which Alexa dutifully repeats. Cartman gets instantly bummed out, though, when his girlfriend Heidi arrives: All they do is bicker, with Cartman groaning and muttering at her every word. Cartman gets along much better with Alexa, who (literally) knows the definition of “subservient”… and shuts up when he tells her to!

In fact, everyone in South Park is buying digital assistants like Echo and Google Home, which makes the rednecks of South Park fighting mad that they’re “teekin’ er jerbs!” (Uh, that’s “taking our jobs.”) That leads to furious anti-Alexa protesters marching through the streets, waving Confederate flags and shouting “You will not replace us!”

Meanwhile, Stan’s dad Randy has found a new calling: renovating houses on TV with his wife Sharon doing the decorating. Their new TV show’s title: White People Renovating Houses. (It’s no Flip or Flop, but it’s undeniably accurate.) But the redneck protests interrupt their taping, and Randy yells at the protesters: “Don’t you know when you wave Confederate flags around, you make us look stupid?” The dispute ends up in court, with Randy saying the protests are making all white people look bad, and therefore ruining his TV show with White People in the title. (“All the other show names were taken!”) But when that fails, Randy offers a truce by offering the rednecks exactly what they want: jerbs. (Er, jobs.) 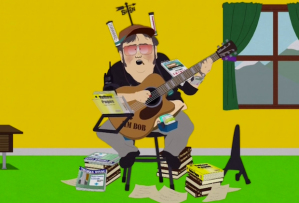 The rednecks end up replacing all of the digital assistants in town, with Cartman’s Echo replaced by a guy named Jim Bob, who’s happy to read the time and play Kendrick Lamar’s “Humble”… on his acoustic guitar. One redneck named Darryl doesn’t want to be an Alexa, though: He wants something “goddamn dignified” and, when Randy confronts him at a bar, he launches into a crazy white-power rant. Randy tries to convince him to change and adapt, using home-renovation metaphors. It seems the walls inside Darryl are load-bearing… or something. He ends up getting a home makeover — and being very happy with it, actually!

Later, Cartman runs to his friends in tears and (hilariously) wrapped in a shawl, accusing Heidi of being “mentally abusive.” And after he loses his Echo, he comes to Heidi’s door apologizing and promising to do the best he can. (Shouting “Heidi, silence!” at her doesn’t go over great, though.) His short-lived epiphany wears off when he finds a stash of forgotten digital assistants in the trash.

Heidi offers a heartfelt apology for her behavior to Cartman’s mom… but Cartman’s too busy playing silly games with all his new Echoes, Google Homes and Siris to notice. The next day at school, he marches up to Heidi, declaring, “I’m finally standing up to you” and says goodbye to her for good. Or at least until the batteries run out.

What’d you think? Give the premiere a grade in our poll, then drop your thoughts in a comment below.