Warning: The following contains spoilers for the Season 4 finale of The Haves and the Have Nots.

In the Season 4 finale of The Haves and the Have Nots, Hurricane Veronica did her damnedest to outdo Irma — and Lord knows, we knew as well as David or Jeffrey that she could. But was the vengeance that the episode’s promos promised would be served hers to savor, or did one of her many (many!) victims finally decide to send the she-devil back to hell? Read on and find out.

‘GOD TOLD ME TO STOP PRAYING FOR YOU’ | As “The Veronica Show” began, Katheryn arrived at the funeral home just as Candace, still reeling from the shock of finding Q’s body in its casket, turned her grief back into rage against Hanna, accusing her of letting the boy die just to make her suffer. “I have never hated anyone or anything as much as I hate you,” Candace spat at her mother. In response, Hanna told her that the tragedy was God’s way of calling the blackmailing call girl’s attention to the error of her wicked ways. In that case, “you can have your God!” Candace screamed. “I don’t want him!” Then, to rub salt in Hanna’s wounds, she announced before leaving that there wasn’t going to be a funeral after all, Q would be cremated. Katheryn offered to call a judge on Hanna’s behalf, but Hanna told her to stand down. It didn’t really matter. “At least we get a chance to say goodbye,” she noted, reopening the coffin to tearfully gaze upon her grandson and thank him for the joy that he brought to her life. “Please don’t let him be lonely,” she prayed. “Please don’t let him be scared.” And, just when the scene became too heartbreaking to bear a second longer — damn, Crystal R. Fox is good — at last, it ended, with Hanna, Benny and Katheryn leaving hand in hand. 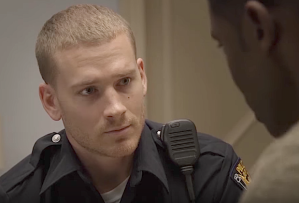 ‘MEN DON’T HAVE BRAINS, WE ARE THEIR BRAINS’ | At Veronica’s, the queen of mean killed time awaiting Jeffrey’s arrival by taunting Melissa and, for good measure, throwing a sandwich at her — you know, for the baby’s sake. “And do something with your hair,” she added. “Get your ghetto ass together.” Later, Veronica headed to the hotel, where she sought out Candace, who was fresh off exchanging threats with Jim. Turned out, Veronica hadn’t just sent Erica flowers, she’d sent David’s new squeeze a bug, meaning that she knew about the hookers’ connection. What did Veronica want? In on their plans for David. In exchange for helping her make him suffer, Veronica would get Candace off for Quincy’s murder — which, given that she ended the scene in handcuffs, was an offer she couldn’t, and didn’t, refuse. Upstairs at the hotel, Jeffrey warned Justin to talk to his wife rather than let her be blindsided. “Your mom won’t do it,” the cop was sure. So, right on cue, Veronica slipped a note under the door saying that she knew Justin was in there. In the trio’s ensuing confrontation, Justin manhandled Veronica, who only laughed that she wanted him to grab her suit. “Grab it,” she said. “I’ll show you how much black lives matter.” As she departed, she told Jeffrey that she’d see him in court, as he was about to go to prison for a long, long time. 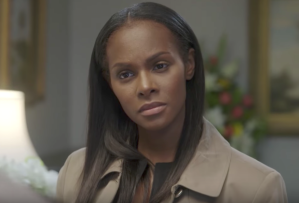 ‘YOU SEE WHAT YOU DID?’ | Before David could take Erica out for a surprise date, Jeffrey called to fill him in on Veronica’s latest threat. Dad’s advice? Don’t go to the courthouse. In spite of the direness of the situation, David still seemed intent on taking Erica out. Priorities, man. Priorities! At the courthouse, Veronica got a call — presumably about Melissa and the coat-hanger abortion she looked like she was about to give herself once the ice queen had left her alone. No sooner had she hung up from that crisis than legal nemesis George started grilling her. His new intel: He knew that Jennifer had called Veronica before she disappeared. After the hearing got underway, Veronica had George’s warrant — and the evidence that it yielded — tossed by Justin’s wife, the judge. Just then, Jeffrey walked in, his mother announcing that he’d admitted to her that he murdered Quincy. As Jeffrey was being arrested, Veronica suggested that the judge recuse herself from the case — and played her tape of Justin in Jeffrey’s hotel room! Once Veronica and Justin were done staring daggers at one another, she picked up Melissa from the hospital after her unsuccessful abortion. They wouldn’t be making it back to the house, though. First, Justin rammed the car with his truck, which tickled Melissa no end. “Somebody hates your ass as much as I do,” she cackled. Then, seizing an opportunity, she grabbed the wheel and steered her tormentor right off the road!

So, what did you think of “The Veronica Show”? Is anyone worried that Veronica was really killed? Grade the episode in the poll below, then hit the comments.