It’s been a season of newfound romance for Suits lawyer Harvey Specter — but has he just been denying his feelings for right-hand woman Donna while dating girlfriend Paula?

In this Wednesday’s midseason finale (USA Network, 9/8c), “some truths might come out” as rival Andy Malick threatens to put Donna on the stand, star Gabriel Macht teases in the following Q&A.

The actor also weighs in on Harvey’s “out-there” relationship with his ex-therapist, and why he’s all for it.

TVLINE | It’s been a while since we’ve seen Harvey with a serious love interest. Was that a side of him you were angling to explore more?
I’ve found that Harvey is so work-centric. He’s such a workaholic… It was great to see him go after someone that he respected, cared for and thought there was some chemistry [with] there, and to see if he could balance out his life in some way. So I was really all for that. I loved the idea of Harvey settling down in some way and growing up. This season, it feels like he’s been growing up in many different ways. That’s been fun to work on. 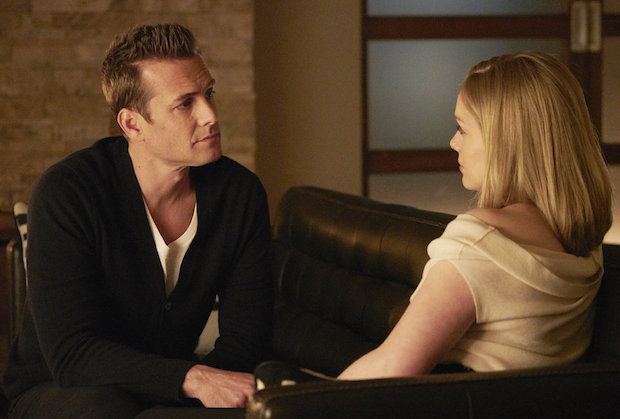 TVLINE | Last time we talked during Season 6, we agreed that Harvey needed to go back to therapy — and now he’s dating his former therapist! What was your reaction when you found out he was setting his sights on Paula?
This show is really… How do I best describe this? Let’s just say we deal with the ethics of relationships and action in the world of law in such an honorable way. [Laughs] Look, Christina Cole is a terrific actor, and I love working with her. I was all game for Harvey to go this route and to find someone who really knew him and who he could potentially start a relationship with… and [to have him] take some of the onus off himself, and try and focus on somebody else for a while. So I was really into it. I love the idea that he’s dating his therapist. It’s so out there. It creates great drama.

TVLINE | As Harvey’s been dating Paula, we’ve seen Donna’s feelings about Harvey come to the surface more. For Harvey, what has this storyline with Paula opened up in him?
It’s opened up this desire to have a home. This desire to be able to get away from work, get away from the drama of the relationships he has, the puzzles that he’s in, the chess-making. It gives him a place to let his guard down and be his true self and not be so uber confident, [and] to allow his insecurities to reveal themselves and to share intimacy. I don’t feel like he’s been able to give that at work, [where] he has to put on this armor and put on this show. I find that his relationship with Paula has been like a refuge. 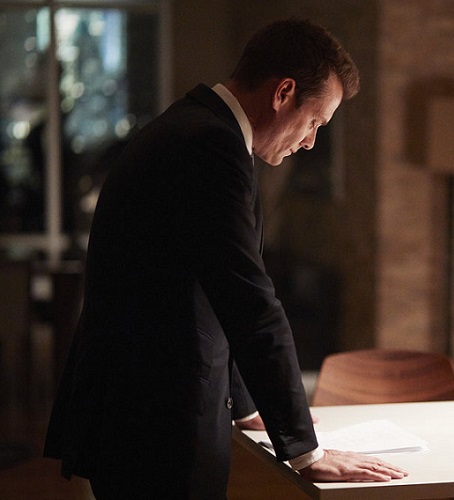 TVLINE | In the teaser for the next episode, we see Mike urging Donna to tell Harvey about her feelings. What can you preview about the dynamic between Harvey, Paula and Donna in the finale?
The idea that [Andy Malick] would go after Donna and put her on the stand creates this unbalanced version of Harvey, where maybe some truths might come out. The last time that they put Donna on the stand was a mock trial, and it exposed a lot of her feelings. I think that Harvey could potentially be in denial about his feelings for Donna. Maybe he doesn’t think they’re right for each other, but maybe he doesn’t know. Maybe he has not really investigated. Maybe he just has too much on his mind with work and all the other stuff going on. So I think what it does is it, like, pushes a button, and that scares him. So he’s a bit on edge. In some way, he reveals that to Paula, [who] is extremely intuitive and knows that there are feelings. She’s not a dummy. She knows there are feelings between [Harvey and Donna]. She doesn’t know the whole of it, and when it gets to the point where she might learn that knowledge, it might be a colossal challenge for all three of them. We’re in the beginning stages of stuff coming out into the open. The seeds are being planted.

Suits fans, hit the comments with your hopes for the finale.