And just like that — insert dramatic finger-snap here — we’ve reached the home stretch of So You Think You Can Dance‘s 14th season.

It might feel like we were just watching Kaylee Millis slay her New York City audition, or cringing as Kiki Nyemchek fumbled his way through a hip-hop routine at The Academy. But in reality, we’re thisclose to learning who will become the Season 14 victor. (Time flies when Jason Derulo isn’t on the judging panel, eh?)

On Monday’s broadcast, the six remaining contestants made their last case for a spot in the finale — but for two of the dancers, all they got was an emotional sizzle reel of their SYTYCD journeys. Not as exciting.

* Lex Ishimoto and All-Star Gaby (Samba) — I still maintain that Lex would be a worthy winner of Dance‘s 14th season, even though ballroom has never done him any favors. Monday’s performance vacillated between mediocre and phenomenal. Lex’s posture was too rigid, and his lower half never comfortably sank into the samba movement… but his synchronization with Gaby was top-notch, and the partnering work — including that combo where she wrapped her legs around his torso, and he pantomimed some bongo-playing — was wonderful. Each week, Lex is such fun to watch because it looks like he’s really enjoying himself on stage — even if the word “samba” probably sent a chill down his spine when he first hit the choreography studio this week.

* Koine Iwasaki and All-Star Marko (Contemporary) — Koine and Marko’s routine earned massive cheers from the crowd, and I suspect that had a lot to do with Koine’s mastery of the clothes hanger that played a big role in the dance. Truth be told, I preferred the moments that took place away from the closet; as impressive as all those lifts were, Koine and Marko’s complicated relationship was showcased best when they were dancing with each other and not a prop — and I didn’t feel either dancer had enough time to put that on display. Having said that, both of them — especially Koine — took what could have been a clumsy, distracting set piece and wrapped their bodies around it with incredible elegance. 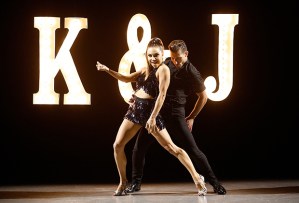 * Kiki Nyemchek and All-Star Jenna (Jazz) — It seems that Season 14 of SYTYCD has had a record number of dances described like this: “This routine is so fast, Dancer A and Dancer B won’t exhale until it’s over!” And don’t get me wrong — I’m a big fan of quick numbers, especially those that leave us wondering, “How did they do that?!” But I’m not sure Kiki and Jenna’s performance passed that litmus test. Kiki’s energy seemed to be flagging in the final 20 seconds of the routine — and I’m pretty sure I saw him wince as he twirled Jenna around one last time.

* Kaylee Millis and All-Star Cyrus (Hip-Hop) — When these live shows first kicked off, I’d have put good money on Kaylee winning the whole shebang. She effortlessly fuses hip-hop with contemporary, and with Cyrus by her side, I just couldn’t envision a finale that didn’t end with Kaylee standing in a confetti shower… which is why I’ll forever be disappointed that the Kaylee/Cyrus match-up has ultimately been one of the season’s most uneven pairings. Coming off last week’s magnetic contemporary, I thought they’d deliver a routine equally as compelling this time, especially in their hip-hop wheelhouse. But despite their strong partnering work and command of the actual steps, they once again fell short of forging a real emotional connection — with the choreography or each other.

* Taylor Sieve and All-Star Robert (Hip-Hop) — The premise for this hip-hop — Taylor and Robert are playing two creatures in the midst of a conflict about their outward appearance — was unique and bizarre, as was the corresponding choreography. It was athletic! It was intricate! It was strange! And Taylor and Robert totally rose to the occasion of the routine, fully committing to the quirky intensity of their competing characters. I wish choreographers Keone and Mari had done away with the costume change — er, costume tweak — near the end of the piece, when Robert and Taylor ripped off part of their shirt sleeves and shifted into Ultra Competitive Mode; you could see that both dancers were concerned with timing the shirt-rip properly, and their focus wavered for just a moment. But on the whole, they did a remarkable job with a dance that could have gone poorly in the hands of less versatile, capable dancers. 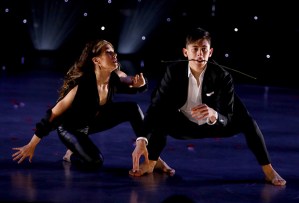 * Logan Hernandez and All-Star Allison (Contemporary) — Logan has proven for weeks now that he is a captivating, technically superb dancer. And yet, whenever he’s announced on the live broadcasts as the dancer set to perform next, I’ve typically needed a solid few seconds to remember who he is. And that’s hardly Logan’s fault; even though he’s a unique dancer, Lex has already been labeled the “quirky” contestant of the Top 6, and Kiki’s vocal fanbase has already deemed him the heartthrob. Thus far, Logan has fallen somewhere in the middle, which is never a great place to be in a reality competition series.

But Monday’s contemporary helped Logan bust out of that bracket of forgettability, and not a moment too soon. From the opening phrase, where Logan took a rose petal from Allison’s mouth with his own lips, the routine was incredibly sensual and passionate — but not in the cheesy, forced way that some of their other duets have been. There was a real rawness here, and just as Logan and Allison sold the audience on their toxic relationship, Logan sold me on why he should advance to the finale.

The Top 6 contestants were then paired off for duets of their own. Lex and Koine sorta fumbled their way through an intensely fast Doriana Sanchez disco, which may or may not have caused Lex’s rotator cuff injury to flair up; Logan and Taylor took on a Mark Kanemura jazz piece (which got major kudos from the judges, but I could have sworn Taylor was a half-step behind her partner at all times); and Kaylee and Kiki partnered on a Bollywood number, which was… not their best.

With that, I hand it over to you. Was this the right time for Logan and Kaylee to go home? Are you pleased with this season’s finalists? Drop a comment below with all of your thoughts.