Warning: The following contains spoilers for the Season 2 finale of Preacher.

Leave it to Preacher, one of the topsy-turviest shows on TV, to deliver a finale for Season 2 that, at turns, left us going, “Huh?” “Wait, what?” “Holy s—!” “Is this really happening?” “Whew!” “No, no, no, no, no!” and, finally, “Oooh.” Is your head still spinning? While the dizziness dissipates, let’s review the big twists served up by “The End of the Road,” then, if you’ve regained your equilibrium, you can grade the episode and hit the comments with your review.

‘WELCOME TO ANGELVILLE, WHERE THE MAGIC OF THE SOUTH COMES TO LIFE’ | In the hour’s prologue, we flashed back to Jesse’s boyhood home of Angelville, where he directed guests in need of spiritual assistance — but not undercover cops hoping to expose the family — to his grandmother, the powerful Madame L’Angell. After being shaken down by a fellow named T.C. — unseen, save for the tell-tale tattoo that tipped us off to the fact that he was the man who killed Jesse’s father — the future preacher angrily stomped the life out of a chicken, then felt bad enough about it to take the dead bird to his grandma, presumably for resurrection. “Everything,” she warned, “has a price” — words that would echo in our ears as the episode drew to a close and no doubt will haunt Jesse in Season 3. But more on that later…

‘HEY, KIDS, WANNA SEE A MIRACLE?’ | Back in present-day, Herr Starr sent his would-be messiah into a classroom full of parochial-school students, purportedly to deliver a Jesus Christ Superstarmaking speech. But really, what the Grail boss intended to record on his cell was Jesse using Genesis to disarm a bunch of Armenian terrorists in a display so miraculous that it would go viral and help him catch up in terms of brand recognition with Humperdoo (aka the Christ child). And though Jesse did take down the baddies, he had to do so the old-fashioned way — Genesis failed him! Why hadn’t he used his power? Starr asked later. “I didn’t need to,” Jesse lied. Nonetheless, the stunt worked, and Jimmy Kimmel’s people were calling about a booking before Jesse and Herr Starr had even left the school. 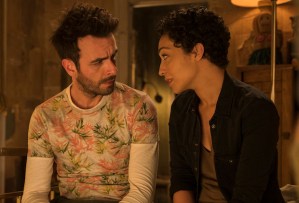 ‘YOU KNOW WE’RE GONNA HAVE SEX AGAIN, RIGHT?’ | While Tulip was out picking up sunscreen — lots and lots and lots of sunscreen — for her and Cassidy’s trip to Bimini, the vampire was back at Denis’ imagining what a bad influence on him his undisciplined son could be. When Tulip returned, she found Cass smoking crack and tried to perk him up by telling him, “Whatever happens next between the two of us, OK… I say let it happen.” But no sooner had they started getting down to business than he’d brutally bitten off a huge chunk of her neck! Thankfully, it was just a waking nightmare. But it still left Cass so shaken that, rather than allow Denis to come to Bimini, he pushed his son out the window and let him burn to a crisp!

‘I NEVER DID TELL YOU ABOUT DALLAS, DID I?’ | At least Banjo made it out alive. (Given the number of animals this show has killed, that’s the real miracle.) Not only did Cassidy protect the dog from Denis, he set his four-legged friend free rather than risk making him a meal on the road. Meanwhile, Tulip, having discovered the Grail’s bug, left Cass in the car while she went to (cough) say goodbye to “Jenny.” She was scarcely through her neighbor’s door when her suspicions that “Jenny” was in on the surveillance were confirmed (by Hoover, hilariously forgetting his abusive role when he came out of the shower). Alas, Tulip had only grabbed a screwdriver to use as a weapon, and Lara had a gun. Before the scene was over, a shot had been fired and Tulip, hit!

‘I FINALLY DID SOMETHING GOOD!’ | Meanwhile, Hitler — and how f—ed-up is it to be seeing Hitler in 2017 painted as a sympathetic protagonist? — ushered Eugene to the ferryman who’d grant him safe passage across the water and home from hell. But as for Hitler himself? He wouldn’t go. He was right where he belonged, he said, turning to leave. Before Eugene’s boat arrived, hell’s superintendent showed and, though Arseface scarcely belonged in an R-rated movie, much less hell, she wasn’t about to let him go. When the ferryman protested, she noted, “God’s gone, and the rules have changed” — and shot him! Just then, Hitler returned, bashed the superintendent and at last joined Eugene on his journey home. Once there, the Fuhrer mystifyingly ran from Eugene, got hit by a car, then knocked down a guy on crutches as he continued to hobble away. 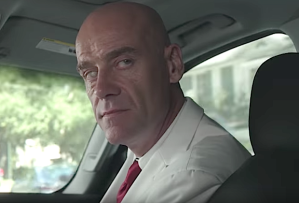 ‘YOU’RE A NATURAL’ | In the final moments of the hour and the season, Jesse received a message from Cassidy saying that Tulip had been shot, and made a beeline for her — Herr Starr telling him as he went to, whenever he was ready, come back for his soul! At Denis’, after considering using window caulk in the absence of SuperGlue to close Tulip’s wound, Jesse tried saving her with Genesis. But again, it didn’t work! Though Cassidy was ready and willing to make her a vampire, Jesse wouldn’t allow it. Let her die, he said. And holy crap — she did!

‘I HATE YOU’ | At least Jesse had a plan to resurrect his girlfriend, it seemed. When last we saw the estranged buddies, they were driving Tulip’s body through the gates of Angelville — that chicken from years earlier apparently still alive and clucking. And Cass was a whole lot less excited about riding shotgun under the circumstances than he had been when he and his crush had been taking off for Bimini. “You hate me now?” Jesse told his pissed-off pal. “Just you wait.” At the same time, in a dingy hotel room littered with soda cans, we saw the dog-man costume hanging, and out of the john, bathed in celestial light, came God… unseen, at least until Season 3.

So what did you think of “The End the Road”? Tulip can’t be dead-dead, right? I mean, Denis, fine. But not Tulip! Grade the Season 2 finale below, then hit the comments.