In the opening minutes of Fox’s The Orville, Ed Mercer catches his (human) wife cheating on him with an alien — and, somehow, that’s not his most awkward encounter of the episode.

Throughout The Orville‘s debut hour, Ed also faces off against an evil extraterrestrial civilization, trips over a sentient blob in the corridor of a spaceship and, much to his chagrin, is forced to become co-workers with the same wife that wronged him. So, it’s safe to say that Ed’s life is weird.

The Orville takes place in the 25th century, where Earth is part of the Planetary Union, a civilization with a fleet of 3,000 ships. Ed, played by Family Guy‘s Seth MacFarlane, gets an opportunity in Sunday’s premiere to fulfill his lifelong dream of captaining an exploratory spacecraft. It’s been a year since Ed found his wife in bed with another species, and even though he’s reaaaally not at his personal or professional best quite yet, he’s put in charge of The Orville because, well, there’s 3,000 ships and not nearly enough qualified captains to go around.

Shortly after Ed’s crew is assembled — a melting pot of humans and aliens, naturally — he gets some bad news: his ex, Kelly Grayson (S.H.I.E.L.D.‘s Adrianne Palicki), is also coming aboard as his first officer. There’s lots of tension, and Ed seizes every opportunity to remind Kelly of her affair, but she’s going to be his right-hand woman until a suitable replacement comes along. 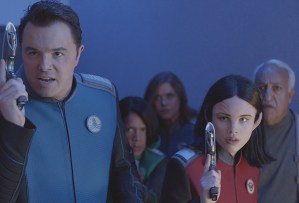 Not long into his tenure as captain, Ed discovers that his first assignment — dropping off a shipment of supplies to scientist Dr. Aronov — is actually much more complicated than he was led to believe. Aronov didn’t need any supplies; he needed a Union ship to help transport and protect his newest invention, a device that uses quantum technology to manipulate the speed of events. (In other words: He’s created a timey-wimey bubble that allows the events inside of it to take place super, super fast. Like, one minute of time could pass in the real world, and inside the bubble, 100 years might go by. Spooky.)

As cool as this new technology is, it could also be weaponized if it gets into the wrong hands… and, unfortunately for Ed and his crew, “the wrong hands” are members of the Krill civilization, and they’ve already showed up to steal the device from Aronov and his team. Cue chase sequence! Cue lasers and cool space guns! Cue Ed and Kelly reluctantly — but triumphantly — working together to take down the Krill and remove the threat of Aronov’s quantum device!

Later, after the dust has settled from The Orville’s scuffle with the Krill, Kelly visits Ed and announces that she’s found him a new first officer, someone to whom Ed has (thankfully) never been married. But, of course, Ed admits that his ex-wife is a terrific problem-solver and, realizing that he can’t do this whole captain thing without her, invites her to stay aboard The Orville for good.

Not only does Kelly accept Ed’s offer, but when she pays a visit to Admiral Halsey (Legends of Tomorrow‘s Victor Garber) to give him the news, it’s revealed that Kelly was the one who recommended Ed for the captain position in the first place. Who could have guessed there would be lingering, unresolved affection between those two?!

OK, your turn. What did you think of The Orville‘s first outing? Watch our interview with the cast at San Diego Comic-Con, then grade the series premiere in our poll and drop a comment.