For the past week, Teen Wolf fans have been asking, “Who got shot?” But as Sunday’s episode revealed, a more appropriate question would have been, “Who didn’t get shot?”

Considering the official trailer for the final 10 episodes included a cut of Melissa Ponzio in a hospital bed, I figured that Scott’s mom would be the one who took the bullet. Then we learned that she was merely one of four victims — Lydia, Mason and Scott’s dad were also hit, though Papa McCall was eventually transferred to a recovery facility outside of Beacon Hills. 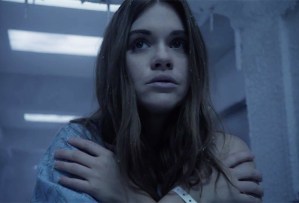 As drive-by shootings tend to do, the incident had a slightly different effect on each of its victims — and no one’s hospital stay was trippier than Lydia’s. She sauntered through an icy dreamscape, which Halwyn somehow used to help her guide Scott and Malia to one of the Anuk Ite’s faces. I think?

Look, if you’ve read anything I’ve written about Teen Wolf in the past, you know I’m not afraid to admit when I’m completely lost — and, guys, I had almost no idea what was happening during any moment of this episode, especially where Lydia, Halwyn and the corpse were concerned.

I’ll tell you what I did understand, though — things are happening between Scott and Malia. Not only is their budding relationship one of the main reasons Peter agreed to fight alongside Scott’s pack against Gerard’s army, but when he urged his daughter not to “fall in love with a dead man,” she responded, “Too late.” That’s right, people, we’re already dropping the L-bomb when we talk about Scott and Malia. These two have progressed faster than any other couple in this show’s history, and for the sake of only having a few more episodes left in its run, I’m OK with that.

MEANWHILE, ACROSS THE POND… | The episode opened with a familiar scene, at least to those who watched the sneak peek MTV released a few weeks ago: Ethan and Jackson were trying to celebrate their anniversary in London — yes, they’re dating now, which makes about as much sense as any other romantic development on this show — only to be attacked by a pair of hunters. The attack was unsuccessful, though not painless, claiming the lives of an antique bowl, a lamp and a few romantic vacation photos. (Honestly, though, every penny of damage caused to that apartment was worth it for the Ethan/Jackson kiss that fans never knew they needed.)

Unfortunately, that’s where the guys’ luck ran out. Upon their dramatic, slow-motion return to the halls of Beacon Hills High at the end of the episode, Ethan and Jackson were immediately greeted by Ms. Monroe, who effortlessly accomplished what her fellow hunters failed to do earlier; the boys’ high school reunion ended with a trip to the hunters’ lair, followed by some complimentary electro-shock torture.

WTF (WHO THE FACE?!) | As if there wasn’t enough happening this week, Liam and Theo also teamed up again (woo-hoo!) for some aggressive interrogations. After “speaking” with Gabe — who’s apparently the one who shot up Scott’s house, though he tried to give Nolan the credit — they discovered that fellow lacrosse player Aaron is the Anuk Ite’s other face.

* I loved seeing Deucalion again — like, a lot more than I thought I would. Considering he was drunk with “DEMON WOLF!!!” power when we first met him, it’s nice to discover that he’s been humbled by his experiences.

* What are Peter, Ethan and Jackson doing to afford the swanky lifestyles they’re all apparently enjoying? Do characters on this show instantly become millionaires as soon as they leave town? (If so, I hope Danny and Kira are living. it. up.)

* I feel like Lydia saying, “The connection between a banshee and a hellhound is stronger than I thought” was supposed to half-heartedly explain why Lydia and Parrish had that thing back in the day, but I still have so many questions.

Your thoughts on this week’s Teen Wolf? Your hopes for the final three episodes? Drop ’em in a comment below.