Thursday’s Project Runway put the remaining 13 designers in an Empire State of Mind, requiring them to draw inspiration from one of New York City’s most iconic locations.

This week’s challenge was to design a look for Heidi Klum Intimates™, following an actual slumber party at the Empire State Building. Most of the designers, particularly Aaron and Samantha (who’s had about 10 seconds of screen time all season), were excited about this once-in-a-lifetime opportunity. The twins, on the other hand, weren’t quite as thrilled; Claire, for some reason, exclaimed, “This is going to be horrible!” before having a confusing amount of trouble riding the elevator up to the top floor.

With Klum serving as the judge, mentor and client this week, tensions ran higher than usual in the workroom. Poor Kentaro was so stressed out that Tim Gunn told him, “If we put a piece of charcoal up your rear end, it would come out a diamond.” (Come to think of it, a few diamonds would have added a nice effect to his design.)

And things didn’t get any better come runway time, as most of the looks were met with confused glares from the judges. But no one’s design was torn apart more aggressively than Deyonté‘s, which received criticisms ranging from “boring” to “hospital gown” to “It doesn’t even look like something to sleep in.” So it came as no surprise when Klum informed him that, unfortunately, he was out of the competition. I mean, when even your model calls the look “frumpy,” you know you’ve got a problem.

We should probably also talk about Aaron, who barely survived ahead of Deyonté. His look, according to the judges, was “lackluster” and “not well done.” Guest judge Demi Lovato even straight-up told him, “I dislike the shorts.” But the worst part about Aaron’s runway look actually had nothing to do with his model — and had everything to do with his damn see-through shorts, which Zac Posen rightfully pointed out as a major distraction: 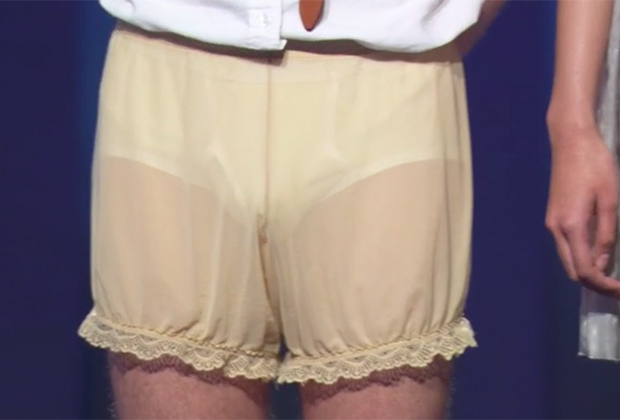 As for the winner, Klum was just as surprised as (I assume) the viewers to award Michael with this week’s top honor. (Seriously, Klum actually asked, “How come he did such a fantastic job?!”) He’s been relatively quiet in the competition thus far, but his look — which the judges called “unique,” “comfortable” and “expensive”-looking — proved he’s one to watch. Behold: 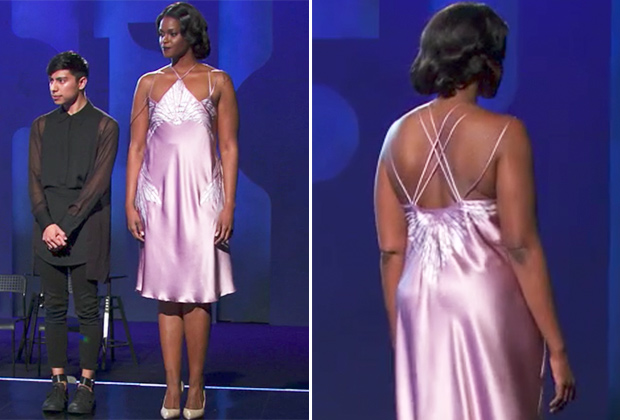 In case you’re interested, the winning look is currently for sale here.

Now for a few assorted thoughts…

* I love the bromance brewing between Brandon and Kentaro. They’re men of few words… but many emotions.

* And how is it that the twins manage to become more obnoxious as the weeks go by? “Everyone’s kind of annoyed,” Margarita said while Claire and Shawn squawked at each other from across the workroom, adding that “it’s not fair” how much they help each other. As Deyonté noted, “I wish I had an extra set of hands.”

Your thoughts on this week’s episode? Was Deyonté the right one to go? Whatever’s on your mind, drop it in a comment below.