Series creator James Roland announced on Wednesday night, after the freshman finale had aired on the East Coast, that the envelope-pushing splatterfest had been cancelled at Syfy.

“I found out not too long ago, but have been trying to think of a way to tell you guys since I felt it was up to me to let the fans know,” Roland said in a post to his Midnight Grindhouse blog. “Ultimately I decided to wait until after the final episode aired so the news did not taint your experience. It simply didn’t seem right to burst the bubble so early, especially with how the last episode plays out.”

“Obviously the ratings were low” — Season 1 averaged 470,000 live weekly viewers, fewer than Syfy’s recently cancelled Dark Matter but on par with the renewed Wynonna Earp— “but it was also a very noisy show on social media (thanks to you guys!) and a very well-reviewed show with critics as well,” Roland noted. “This I do know: despite canceling us, Syfy was the only network with the steel to make the show in the first place… and for that I’m forever grateful.”

Roland says the series’ future, perhaps via another outlet, is “unclear,” adding: “There’s definitely no Season 2 in the immediate future, 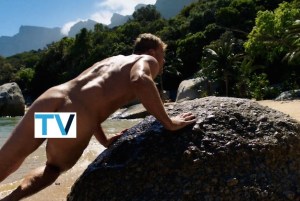 but I remain cautiously optimistic there’s more story to tell in this world.”

Indeed, the close of Wednesday’s season finale — SPOILER ALERT! — suggested a new Blood Rock prison setting for at least bare-naked Arthur, whom Grace had forced through a blood gate to safety, as Heart HQ collapsed on top of her, Karma, a dying/dead Slink, a dying/dead Christopher and a tearful Aki.