As Showtime’s Twin Peaks revival came to a close, a key player was conspicuously MIA: Audrey Horne, who last was seen darting across the roadhouse dance floor, to husband Charlie, only to suddenly find herself staring into a mirror, in what appeared to be a pristine hospital setting.

The startling switch-up seemed to confirm, as many had theorized, that Audrey’s reality, chronicled in just a handful of scenes, was anything but. And that Charlie, played by Clark Middleton, perhaps wasn’t her husband, or even real.

TVLine invited Middleton, whose previous TV credits include The Blacklist and The Path, to reflect on his first collaboration with filmmaker David Lynch and weigh in on Charlie and Audrey’s peculiar scenes….

TVLINE | How did this opportunity come to you, and what was your initial reaction?
I had worked with Quentin Tarantino (in Kill Bill: Vol. 2) and also Bong Joon Ho (Snowpiercer), and Johanna Ray casts for them and also casts for David…. Or David may have known my work. But I’d always been a fan of the original show and I’d love to work with David, so I had asked my agent, “Can you inquire about that?” At one point it wasn’t happening, and then it was happening again…. But out of the blue we get a call. I sent a tape over, of me just chatting, and the next time I was in Los Angeles they sent over the script, and I had the offer. But I only saw my storyline, nothing else.

TVLINE | For someone playing a brand-new character, how much are you told up front?
Nothing. Nothing. I knew the old Twin Peaks, and when I was cast I had about a month before we shot so I went back and binge-watched the old one, again—

TVLINE | To get yourself into that “mood”?
Yeah. Yeah. The thing that most turns me on as an actor, aside from the process of trying to mine the material through this character and make choices that convey hopefully some kind of human insight, is going into the world of the particular artist whose film you’re making. It was about going in and living in David’s world.

TVLINE | How does David differ as a director to work for versus Tarantino, Ang Lee, Richard Linklater…?
Each bring their own things and their own energy to it. And any great filmmaker creates a unique world. So when I saw the [Twin Peaks] script, that in itself clearly presents a certain atmosphere, a certain world. It’s interesting, there is a mood in David’s work that is appealing to me as a fan, but you can’t act that. Uta Hagen used to say that “mood spelled backwards is doom,” so as an actor what I do is I gauge whatever reality I’m creating to that filmmaker’s world. 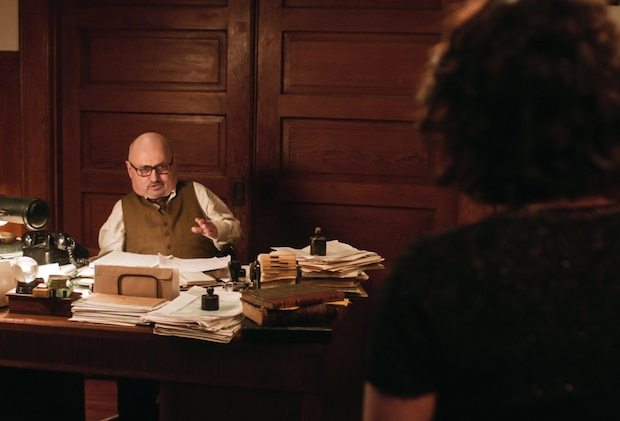 TVLINE | Speaking of  realities, was there anything in the script for your very first Twin Peaks scene, anything in the scene headings, that suggested “all is not what it seems”?
No, not really. That’s a really, really good question, but what you see is there on the page. With that kind of artist, you don’t want to ask too many questions. It’s better for me as an actor to live in the question. The material was so clear — like, if you look at the dialogue from sentence to sentence, that’s what we call a “moment.” That is one individual moment, and they were all so rich.

TVLINE | In the moment where Charlie argued to Audrey, “I don’t have a crystal ball….,” did you point out — or appreciate — the fact that he did have one, right there on his desk (see photo above, far left)?
I thought about that. I think that, given the nature of Twin Peaks, I would be doing a disservice to the audience if I really talked about what my point of view is on that stuff. What’s more important is how the audience experiences it for themselves.

TVLINE | I was thinking more of a jokey aside to a crew member between takes — “You know there’s a crystal ball on this desk, right?”
It’s interesting because everything has a purpose, and that clearly had some relevance. There’s a reason it was there, there was a reason for that line. But it’s up to the audience to figure out what that is.

TVLINE | Did Sherilyn Fenn have any anxiety about recreating Audrey’s iconic dance?
She’s a pro, an absolute pro, and I had such a great time working with her. She shows up and does her work, and obviously she and David worked together before—

TVLINE | So maybe she was conversely excited to do it?
I think that any actor would be excited to show up and work on that material, and work on it with David.

TVLINE | Being a Twin Peaks fan, you must have been jazzed to realize that not only would you be a part of the revival, but you would be presented as the Audrey Horne’s husband.
Absolutely. I knew what an iconic television character Audrey Horne was, and I had seen Sherilyn in other stuff, too, and I knew the kind of “heat” she brought to her acting. I’m always looking for actors to bring heat to it, because it gives me a lot to work against. And she just brought it. 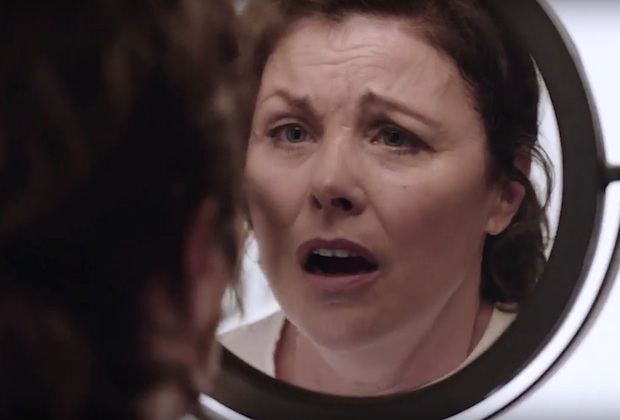 TVLINE | Best you can recall, what was the script direction for the very final moment that you were a part of? You’re at the roadhouse, Audrey is dancing, the brawl breaks out…. Audrey races to and grabs Charlie — “What is going on?!” — and we smash-cut to her looking in a mirror, in what looks like a hospital gown. What does that look like in a script?
I don’t remember, to tell the truth, I just remember shooting it, playing what was in front of me there. We didn’t really talk about it. When you shoot something, you have a certain feeling about how it went, and then if it’s something you really enjoyed doing you may look back when it comes out. Things don’t turn out always the way you think they will, but I was more pleased when I saw how this turned out, like, “Wow, this is really great.”

TVLINE | But as you said before, you only got your scenes. If you weren’t actually on set for the mirror moment, maybe that wasn’t even in Clark Middleton’s script.
Yeah, I don’t remember. Again, what’s important is the questions more than the answers. There really are no secrets to unveil about the process of Twin Peaks. I just have great respect for David Lynch. I worked a lot with Sam Shepard in the theater, and Joe Chaikin, and the great thing about that is you don’t question it, you just do it. And that’s what is exciting.