While many of us enjoyed the final hours of a three-day weekend, the remaining So You Think You Can Dance contestants worked overtime for the Fox series’ Labor Day installment.

And oh, what an episode it was. There were tears, courtesy of Mary Murphy. There was an overuse of the word “stupendous,” courtesy of Vanessa Hudgens. And there was some infuriating favoritism of one particular couple, courtesy of Cat Deeley.

All that, and a genuinely shocking elimination — at least for this recapper, who did not see it coming.

Read on for a breakdown of Monday’s performances with the All-Stars:

* Lex Ishimoto and All-Star Gaby (Hip-Hop) — Halfway through Lex’s hip-hop routine with Gaby, I realized how happy I’d be to see him win the entire season — and how much he’d deserve it. Not only did Lex come into the Top 10 with the dreaded “no personality!” label, but he wasn’t able to dance in his own style for a full month of live shows. In the meantime, though, he’s mastered the cheekiness of Broadway, the technical intricacies of tap — and, as evidenced by Monday’s performance, the fierce swagger of hip-hop. Of course, Lex works hip-hop movement into his regular solos anyway, so perhaps I shouldn’t have been so blown away by this duet. But even when dancing next to a powerhouse like Gaby, Lex was completely magnetic, creating a persona that was at once cocky and wonderfully silly.

* Logan Hernandez and All-Star Allison (African Jazz) — There aren’t many weeks left in Season 14, and Logan and Allison still need to have their moment — that rare, gasp-inducing routine worthy of multiple DVR rewinds. Monday’s African jazz was athletic and strong, and Allison and Logan seem to have an unwavering trust in one another. But the finale is nearing, and even with a dance as impressive as this one, I worry they’re running out of time to get on voters’ radar (and stay there). 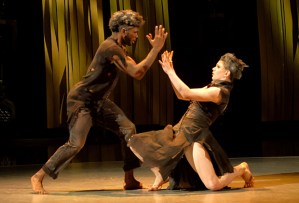 * Kaylee Millis and All-Star Cyrus (Contemporary) — Thank goodness Tyce Diorio knows how to choreograph for a pair as quirky and unique as Kaylee and Cyrus. Even though this was a contemporary piece, Tyce worked in a few hip-hop combinations — or, as Nigel would call them, “jerky movements” — that allowed both dancers to bring their own flair to an emotional performance. Even better? For the first time since the live shows began, Kaylee and Cyrus really seemed to connect, instead of awkwardly grinning through styles with which they’re clearly not comfortable.

* Kiki Nyemchek and All-Star Jenna (Broadway) — Color me utterly stunned that when this dance came to a close, all three judges were on their feet and Jenna was doing a victory lap around the stage. That’s not to say Kiki and Jenna’s routine wasn’t a remarkable feat of coordination and timing; the fact that they made it through the dance without fumbling a single cane is seriously commendable.

But I would have liked to see Jenna and Kiki strutting around that stage without a care in the world that they were throwing and catching canes nonstop for 90 seconds. Instead, they seemed nervous, like they knew how much potential there was for the entire routine to come crashing down at the drop of a cane. (Plus, Jenna lost her footing for just a second, right as the dance was approaching its most dizzying pace.) I wanted this number to be the showstopper that Kiki had teased — but neither he nor Jenna seemed confident that they’d actually get through it. 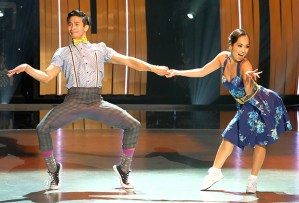 * Koine Iwasaki and All-Star Marko (Jive) — Given her place in the Bottom Three last week, I’m not sure Koine has built up the fanbase that she’ll need to get to the finale — but she’s certainly proven that she belongs there, whether or not the votes actually reflect that. Just a few weeks ago, we watched Koine embody a conflicted, furious pageant queen with wonderful intensity; this time, she floated through a jive that never faltered in its glee or grace, despite how exhausting the choreography looked.

* Taylor Sieve and All-Star Robert (Contemporary) — Good grief, So You Think You Can Dance — we get it already! You want Taylor and Robert to win this thing! Look, it’s obvious that their partnership is a genuinely beautiful thing; their contemporary duet from the first live broadcast will likely go down as one of the series’ best ever. But they are just one of seven incredibly talented couples who deserve this season’s crown, and there was no need on Monday for Cat Deeley to preemptively tell us how much we were going to adore Taylor and Robert’s performance.

Interestingly enough — despite the standing O from the judges and Mary Murphy’s waterworks — this dance didn’t become my new favorite. SYTYCD has delivered dozens of contemporary routines that can send even the most focused brain down a YouTube rabbit hole. But the rest of them, as Nigel has previously said, are often about reaching and emotion, and it means nothing — and that’s the category I feel Taylor and Robert fell into on Monday. From a technical standpoint, they were stunning, and their admiration for one another is a joy to watch. But the relentless gushing from Nigel, Mary, Vanessa and Cat has gotten tiresome, especially when so many other duos have proven they’re worthy of making it this far.

* Mark Villaver and All-Star Comfort (Hip-Hop) — Misha Gabriel’s concept for this dance — that Mark was a wannabe ninja, training with sensei Comfort — was precisely the fun, funky storyline that Mark and Comfort have earned after weeks of intense love stories. But it wasn’t until the last third of the routine that either dancer really hit his or her stride. Perhaps it was the bandanas shielding Comfort and Mark’s faces for most of the piece, or the student/teacher relationship that they had trouble embodying. Regardless, what should have been an unforgettable hip-hop performance, especially in the hands of this duo, became a just-fine ending to the evening.

And now, your results:

ELIMINATED
Mark (my word, that scream from Mark’s female fans in the crowd!)

With that, I hand it over to you. Was Mark the right choice for elimination? Hit the comments with all of your thoughts on Monday’s episode.