On The Fosters, “all of our parties have their dysfunctions, usually,” executive producer Joanna Johnson notes. So why should the prom-themed summer finale be any different?

Before the teens even get to the dance, there’s plenty of angst and turmoil at home in TVLine’s exclusive sneak peek. For starters, Jesus couldn’t look less thrilled to be going to prom solo, while Mariana wants to make sure chaperone Stef isn’t going to ride in the limo. (#soembarrassing) And that’s just the beginning of the night.

TVLINE | Prom is a rite of passage for most shows with characters in high school. What makes The Fosters‘ prom unique and memorable?
This prom is a prom that wasn’t supposed to happen. It’s kind of a rebel prom, which the kids decided to put on themselves after it was cancelled by Drew. It’s being done in the derby warehouse, so it involves the melding of those worlds. We have unique characters on our show and unique couples. That differentiates it in some ways.

TVLINE | Jesus and Emma are broken up, Mariana is single… who’s going with whom to prom? Any unexpected surprises?
Jesus is going stag to prom. Poppy is coming along to prom with Mariana, who’s kind of going by herself to prom. Unfortunately, her dates are Logan and his girlfriend Olivia… [Mariana] is interested in Logan, but she certainly doesn’t want Olivia to know it. So she’s going to do her best at prom to get Olivia off the scent of what she’s really up to with Logan. As usual with Mariana, it’s not well thought out and ends in somewhat of a disaster. 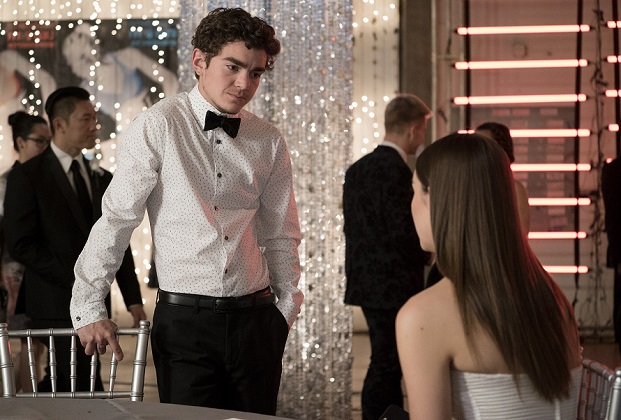 Poppy flirted with Jesus at the derby fundraiser party. She certainly wouldn’t mind hooking up with him. Callie’s going to go with Aaron, but there’s a chance that they could run into AJ and his girlfriend, and that’s never a comfortable situation.

TVLINE | Relationship drama tends to go down at proms, and the promo hinted at heartbreak. Is there anything you can tease about that?
Whenever you go to prom, you run into old boyfriends, and that could cause some uncomfortable moments with new boyfriends and girlfriends. At prom, there’s pressure for everyone to have a good time and for no one to get disappointed. But there usually is somebody who doesn’t get asked to dance, or who is pining after an ex. We certainly have all that going on.

Fosters fans, press PLAY above to watch the preview, then hit the comments with your prom hopes.