It’s a little odd to feel nostalgic for the New York City of 1971, when the streets around Times Square were piled high with trash and danger lurked around every corner. But that speaks to the pure storytelling power behind HBO’s The Deuce (debuting Sunday, Sept. 10 at 9/8c), the vividly grimy new drama from The Wire creator David Simon. He locates the pulse of raw energy underneath all that sleaze and vice, and taps into it to create a rich and colorful tapestry — and one of the fall’s best new shows. 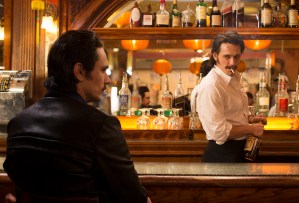 James Franco stars as Vincent, a working-stiff bartender putting in extra hours to support his kids while his wife runs around on him. (He’s basically a walking Bruce Springsteen song.) Trying to drum up business for his failing bar, Vincent puts his waitresses in leotards and quickly learns: Hey, sex sells! But Franco also plays Vincent’s twin brother Frankie, a slick con man who’s run up huge gambling debts all over town… which leads to Vincent getting slowly pulled into the mob underworld along with him.

The Vincent/Frankie saga is just a small sliver of The Deuce‘s story, though. There’s also Maggie Gyllenhaal as street hooker Candy, a single mom who sees a new career path for herself in the bright lights of the nascent porn industry. There’s Revenge alum Margarita Levieva as street-smart NYU student Abby, who isn’t afraid to plunge headfirst into New York’s seamier side. And there’s also a galaxy of pimps and whores, operating in plain sight under the watchful eye of the NYPD. It’s all a bit sprawling, with at least a dozen main characters to tend to. (The pilot alone is 84 minutes long.) But it’s all filmed with an admirable patience, giving scenes time to breathe and find themselves. 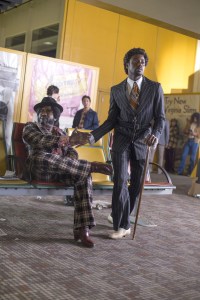 Like when Candy has a tender encounter with a teen client that turns into a hard-nosed business negotiation. Or when the cops take Chinese food orders from all the hookers they just rounded up and stuck in a holding cell. Or the terrifically entertaining scene in the pilot, when two chatty pimps (Gary Carr and the Roots’ Black Thought) sit at the Port Authority bus terminal and discuss President Nixon’s Vietnam strategy while waiting for new prospects to arrive. The Deuce is stitched together from keenly observed vignettes like these — scenes that bring the hustle and grit of 1970s New York to vibrant life.

Gyllenhaal is excellent as Candy — expect Emmy buzz for her this time next year — and Franco is quite good as Vincent, too. But the decision to have him play twin brothers is a glaring mistake; it feels like a gimmick, a flimsy parlor trick. (The characters are apparently based on real-life twins, but that doesn’t make it any less distracting when two James Francos are onscreen together.) I had to rely on a head wound Vincent suffers in the pilot to tell the two brothers apart, and it doesn’t help that Frankie isn’t given nearly the depth Vincent is. He’s just a stereotypical bad-boy loose cannon, and ends up being one of the show’s weakest characters.

The Deuce also gets bogged down by subplots featuring generic mobsters and tedious construction deals. (Season 1 is only eight episodes, so there’s not a lot of time to dawdle, and the porn angle doesn’t really kick in until Episode 2.) But it offers plenty of local color throughout — a little messy at times, yes, but loaded with potential. In a way, The Deuce feels like HBO’s atonement for last year’s misfire Vinyl: a similar retro drama that got tripped up by glamorizing the rock-‘n’-roll ’70s. The Deuce seems to understand that this is an era you wouldn’t want to live through again, but can still be a pleasure to observe — from a safe distance.

THE TVLINE BOTTOM LINE: The Deuce is a vividly drawn portrait of 1970s New York that pulses with energy, thanks to sharp writing and strong performances.