Richard Anderson, best known for co-starring in the 1970s action shows The Six Million Dollar Man and The Bionic Woman, has died at the age of 91. 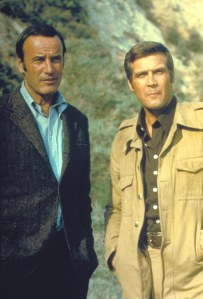 Our sister site Deadline reports that Anderson passed away Thursday; no cause of death has been released. Anderson starred alongside Lee Majors as Steve Austin’s boss and handler Oscar Goldman on ABC’s Six Million Dollar Man, starting with the show’s second episode, and reprised the role on the 1976-78 spinoff The Bionic Woman, opposite Lindsay Wagner. He played Oscar Goldman again in a series of Six Million/Bionic Woman reunion movies, the last of which aired in 1994.

Before Six Million Dollar Man, Anderson played police lieutenant Steve Drumm in the final season of Perry Mason, alongside Raymond Burr. He also had roles on Gunsmoke, The Fugitive and Knight Rider, along with a nine-episode stint on Dynasty as Senator Buck Fallmont.

“Richard became a dear and loyal friend, and I have never met a man like him,” Majors said in a statement. “I called him ‘Old Money.’ His always stylish attire, his class, calmness and knowledge never faltered in his 91 years… He was still the sweet, charming man when I spoke to him a few weeks ago. I will miss you, my friend.”

Wagner added her own condolences: “I can’t begin to say how much I have always admired and have been grateful for the elegance and loving friendship I was blessed to have with Richard Anderson. He will be greatly missed.”