Another year, another Night Shift finale recap where we aren’t sure yet if the NBC series will return.

But should the (typically) summertime staple get picked up for Season 5, here is where things were left standing with regards to the assorted staffers.

Having pulled the trigger on a military medicine training program (in which medical professionals work alongside Army Rangers and such), SCOTT fielded some heat from JULIAN, who worried about the Cummings Medical group getting a black eye if the endeavor went sideways. But in the end, Rob Estes showed up to award SAM the Army contract — at which point Scott suggested the program could be expanded to train Navy, Marines, S.W.A.T… all while giving Julian credit for the idea. Good soldier, indeed.

(On the personal front, Julian started welcoming son-in-law-to-be KENNY into the Cummings family circle/grooming him to be a suit. Paul warned Kenny about what that means, but Kenny deflected the cynicism, saying he was happy to feel wanted, to have his potential seen.) 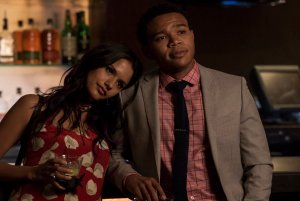 Sparked by guest patient Paige Jennings (working undercover for the KGB, obvi), SHANNON and PAUL got to reconsidering what makes them happy on the job front. Turned off by the “rappelling out of airplanes,” body armor and what not that has been going on lately — and still wounded by Jordan’s review — Shannon announced that she was going to seek a residency elsewhere. Paul meanwhile decided to break out of his comfort zone and work his medical magic abroad, in, like, Africa. TC makes some calls and gets Paul assigned to Syria (more on that in a bit), and the kid takes off after leaving his dad with just a text. As for Shannon, Jordan appeals to her to stay put, ultimately offering a compromise, as her friend: work with your reservation’s clinic for six months, then come back to SAM. Deal! 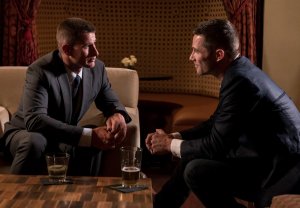 Egged on a bit by training program member REAGAN (Rookie Blue‘s Missy Peregrym channeling Season 1 Kate Beckett) — with whom he and the others braved a non-simulated scare, tending to a campus shooting — DREW got to thinking about husband Rick’s Ranger tab that he carries around (in hopes that he one day will earn his own). But to join up would leave the hospital hanging, especially in the wake of Cain bailing. Drew is about to give up on his dream when Rick urges him not to, saying that SAM will always be there when he comes back.

But who will fill Drew’s spot in Scott’s military medicine training program? Why, none other than TC, who at the last minute decided to stay put — at least until the training program has ended — rather then return to Syria, where MS-battling AMIRA is now working alongside Paul (who took TC’s spot). TC’s decision came after an undertone-laden conversation with JORDAN, at Kenny and Bella’s engagement party, about how San Antonio “doesn’t need him anymore,” whereas Syria does. But oh, “San Antonio” will miss him, Jordan countered — words she seemed to reiterate during the teary toast she gave at the party.

Are you glad to see TC stick around? Do you want the show to return to a split narrative and keep tabs on Paul and Amira abroad? Do you hope that if there is a Season 5, Missy Peregrym returns (as hinted) on a steady basis? And where in the world was Rachelle Lefevre’s “Major Natasha Anthony”? (Dropped because of the actress’ new gig, maybe?)