Only eight contestants remain on So You Think You Can Dance‘s Season 14 roster, and it seems they’re willing to do anything to stay in the competition: Get tied to a chair! Dance in a pile of garbage! Wear strange blonde wigs! (Whoops, sorry. That was just Vanessa Hudgens.)

Monday’s episode of Dance also delivered some major nostalgia for the Fox series’ glory days, back when 20 amateurs would make it to the live shows and pair up with one another for two months of remarkable growth. (Nigel, if you miss it so much, please make it a thing again.)

But at the end of the broadcast, we were forced once again to say goodbye to a dancer who was just hitting his or her stride. First, let’s recap the amateur/All-Star duets:

* Koine Iwasaki and All-Star Marko (Jazz) — I’m not entirely sure that the judges and I were watching the same routine here. After the lights came up, I expected Mary, Nigel and Vanessa to give Koine and Marko pitying looks and quickly comment on the dancers’ missteps — because, from my vantage point, Koine and Marko were often out of sync, and Koine didn’t get nearly as much height as Marko did on those jumps. There’s no harm in starting an episode with a light, story-less routine, but I was disappointed that Koine and Marko couldn’t build on last week’s powerful hip-hop with something more substantive.

* Taylor Sieve and All-Star Robert (Hip-Hop) — Instead of using his executive producer power to direct creepy, lecherous comments at the female contestants, Nigel Lythgoe ought to fire the stylist who put Taylor’s hair in that long, straight ponytail, which obscured her face (and Robert’s, at times) throughout much of the routine. But when we could see what Taylor was doing, it was a joy, right down to the stank face she maintained throughout the piece. Taylor didn’t hit every beat as hard as Robert did, but given her prim-and-proper contemporary roots, I was utterly delighted to see how well she curved those shoulders and sank into the rhythm.

* Lex Ishimoto and All-Star Gaby (Contemporary) — Of the many reasons that I’m glad Lex finally danced in his own style, his emotional connection to this contemporary piece tops the list. Of course, his physical prowess was also astounding: that careful, controlled handstand; the effortless isolation of his muscles; the core strength needed for the climactic lifts. But in this week’s routine, Lex finally seemed to feel what he was dancing, rather than grinning and bearing it for the duration of a Broadway number, tap combo or Argentine tango. When Lex’s shoulders shook, in perfect sync with the soundtrack’s jangling tambourine, he beautifully communicated every ounce of pain and frustration that the choreography required. 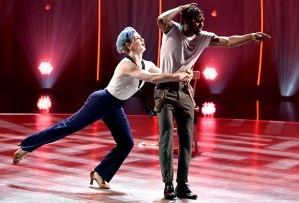 * Kaylee Millis and All-Star Cyrus (Cha-Cha) — Though Kaylee occasionally dipped into smile-widely-until-this-dance-is-over territory, the confidence, sass and sharp hipwork that she brought to this cha-cha was easily the evening’s most pleasant surprise. Truthfully, when Kaylee first wowed us in her audition (and presumably sailed through The Academy, given how rarely we saw footage of her), I thought she’d be a Jeanine Mason or Katee Shean type, who would effortlessly master any style thrown her way. Four weeks into the live performances, she hasn’t quite proven that she deserves the Dance crown, but I admire her refusal to back down from a challenging style.

* Mark Villaver and All-Star Comfort (Broadway) — Mark and Comfort’s latest performance didn’t have the emotional gravity of past routines, which is a common pitfall for Broadway choreography on this show. But Mark and Comfort still have the most intense, natural chemistry of any Season 14 couple, and it was such fun to watch them slink and strut around the stage — even if their routine, on the whole, was one of the night’s most forgettable.

* Kiki Nyemchek and All-Star Jenna (Jazz) — It says something — but not exactly something good — that I was more fascinated with the comic-book stylings of the set design and makeup than I was with Kiki and Jenna’s actual dancing. That’s not totally their fault; this wasn’t Travis Wall’s most compelling concept (Jenna wants Kiki’s money!), nor did the soundtrack elevate the routine. Still, Kiki and Jenna’s performance should have been able to transcend all the oddities around them — and this time, it wasn’t enough.

* Dassy Lee and All-Star Fik-Shun (Contemporary) — At last, Dassy and Fik-Shun looked between the couch cushions this week and finally found their long-missing emotional connection. Not only did this contemporary piece have a real depth, but it was also technically astonishing. Dassy and Fik-Shun’s movements were so controlled, so balanced, that you could practically hear them communicating with each other as they pulled and stretched one another across the stage. Though it’s been fun to watch Dassy and Fik-Shun tackle light-hearted routines thus far, they proved with Monday’s routine that they can handle much weightier material.

* Logan Hernandez and All-Star Allison (Lyrical Hip-Hop) — It’s not often that Allison Holker takes a backseat to any dancer; she’s so skilled, so confident, so versatile, that it’s nearly impossible to watch anyone else when she’s on stage. And yet, Logan managed to eclipse his All-Star on Monday night. Even though the concept for this dance was saccharine and romantic, Logan still brought strength to every movement. He was loving, but powerful; tender, but fierce. It doesn’t seem Logan is connecting with voters quite yet — but if he can solidify a fanbase, he seems destined for the finale.

The eight remaining contestants were then paired up, sans All-Stars, for four more routines: Lex and Taylor (for a positively enchanting classical jazz); Koine and Kiki (for an electric salsa); Kaylee and Logan (for a lovely, emotional contemporary) and Mark and Dassy (for an umbrella, ella, ella-centric — and, frankly, just OK — hip-hop).

OK, your turn! Did Dassy deserve to be eliminated? And which of Monday’s performances blew you away? Drop a comment below with all of your thoughts.