Until TVLine recapper M.T. Wentz gets here bright and early Monday with his deep dive into Twin Peaks Part 16 (of 18), I wanted to give everyone (myself included) a place to cough up some initial reactions to alllllll that transpired during that hugely eventful hour — before and after, but primarily including the long-awaited “awakening” of FBI Agent Dale Cooper. 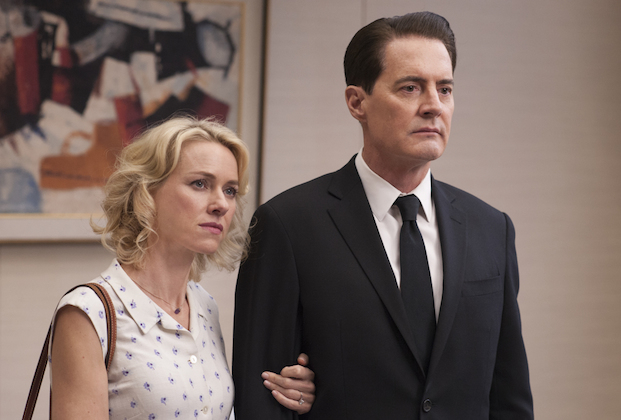 On the heels of a cold open in which Mr. C dispatched Richard Horne to scout out the precise location of the coordinates given to him by two different people (cue “shocker” No. 1), we see that in the wake of Dougie jamming a fork into the electrical outlet, he landed in a coma. But after the hospital room clears out, the patient suddenly springs to life, sits up and looks to an empty chair, where one-armed Mike appears and confirms that Cooper is “finally” awake. Cooper then rips out his IVs and such, assures a returning Janey-E as well as the doctor that he is right as rain, and sets out to put his Las Vegas brood in the Silver Mustang Casino’s care, while he jets off to Twin Peaks, Washinington via Spokane, in the Mitchum brothers’ private jet.

Along the way, Cooper wowed family and friends with his loquaciousness, the new spring in his step and his ability to drive (well, seemingly arousing Janey-E to a new degree). Before heading out to the jet, he said a warm, heartfelt goodbye of sorts to his wife and son, while assuring them that Dougie — er, “I” — will return. (On the limo ride to the airport, he then dazzled those Fed-fearing, golden-hearted Mitchums with his assorted truths, including his vocation as a G-man.

Again, M.T. Wentz will be here Monday morning to recap the whole shebang — including the shootout that erupted in Dougie’s neighborhood, felling two recurring characters; Diane’s darrrrrrk truths; and of course Audrey’s roadhouse shimmy (and the reality-twisting double-take that closed the sequence and hour). But for now, use this place to offer your reaction to “No knock, no doorbell” — perhaps the revival’s most eventful “part” thus far.