The following contains spoilers from the Season 2 finale of Syfy’s Wynonna Earp.

Mom was very much the word as Wynonna Earp push, push, puuuuushed out its Season 2 finale on Friday night.

In an episode in which the actual delivery of a new Earp heir, named Alice Michelle, took place off-screen and almost seemed happenstance (save for the threat of being fed to a demon!), the biggest twist came in the very final frame. After getting smacked around by Bobo, killing two black widows with one “stone” and birthing the aforementioned baby (which she promptly sent away to Aunt Gus for safekeeping), Wynonna hopped on her hog and headed off to a remote bit of wilderness. There, she approached a voluminously tressed woman who was shrouded in a blanket and staring out at a river, and said, “Fine, you were right. Bulshar’s back. Now what do we do about it… Momma?”

What will they do about it? And what might Momma Michelle look like? Here’s what showrunner Emily Andras shared with TVLine about those topics and others.

TVLINE | How tempted have you been to play the Mom card? Did you feel you had to earn it first?
I did feel like we had to earn it. I wanted to make sure that we knew the story of Mom before we brought her on-screen. There have been a lot of parental figures of mixed motivation on the show already, but it seems like Wynonna (played by Melanie Scrofano) having this huge secret — she obviously knows where her mom is and what she’s been up to — was a great capper to the end of a crazy season.

TVLINE | Has Wynonna, and Wynonna alone, known about Michelle all along?
That’s a really good question. Tune into see Season 3 to get the answer to that!

TVLINE | So… your dream casting for the role? Someone with hair for days?
It’s someone with hair for days. It probably has to be someone Canadian, just given our pedigree.  Sigourney Weaver is my dream casting for everything, l so I would say her, 100 percent. She could pull off the hair, and she has the sass. But Lucy Lawless would be incredible, can you imagine? Ohhh, if Xena was Wynonna Earp’s mother… I feel like the feminist/warrior princess time continuum would explode, but it would be completely worth it. That would probably be my No. 1 right there.

TVLINE | Safe to say that Michelle is a bit broken?
That’s a pretty safe bet, with characters on this show. Wrapped in a blanket, sitting in the middle of the wilderness staring out at a river… you may not be the most together person. So yes, it’s safe to say she’s a bit broken — but in traditional Wynonna Earp fashion, hopefully broken in the most badass way possible.

TVLINE | The fact that Wynonna has turned to Mom suggests that Bulshar will present a very unique challenge.
It’s pretty shocking that Mom obviously has some insight into this demon. It’s not a secret to say that this seems to be the demon who cast the Earp curse, so that’s why he’s going to be such a challenging one to put down. It’s interesting that Momma Michelle has filled Wynonna’s head in the past with ideas about Bulshar, so we’ll have to find out what they are.

TVLINE | Once we lay eyes on Bulshar, will he take the form of someone pleasingly telegenic and demo-friendly, 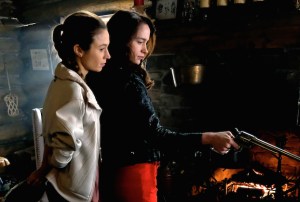 or will he remain a bit gooey?
Don’t make me choose, I can do both! Demons are complicated. I would absolutely love to cast someone incredible, like a Gabriel Byrne type. But as always with these pesky demons, there’ goo underneath. Always.

TVLINE | As for Waverly (Dominique Provost-Chalkley), will she continue to look into the matter of her true paternity?
I would say so — and now we have someone who might have information on that, which is Waverly’s momma. All we know is that Miss Waverly Earp is not a Revenant, as suspected. But is she entirely human? Mmmmm, I’m not sure!

TVLINE | Outside of the Earp girls, who has the most unexpected Season 3 journey ahead?
Can I do a tie? I’d say Doc Holliday (Tim Rozon) and Nicole Haught (Katherine Barrell). Those two have some interesting secrets and lies coming down the pike. Haught seems to have a file on Bulshar at the end there, so it’s like, “What does she know?” Everyone has backstory to explore, for sure. This show is called Wynonna Earp, it always comes back to Wynonna, but as far as peripheral characters, those are two that I know have really juicy stuff coming.