You know how they say smoking marijuana can make anything funny? Well, whoever said that never watched Netflix’s appallingly bad new weed-com Disjointed. Because it would take a tractor-trailer full of ganja to make this mess tolerable.

You might have seen that Disjointed (debuting this Friday) stars the great Kathy Bates and airs on Netflix, and assumed that it must be innovative in some way. But don’t be fooled: This is basically a lame CBS sitcom dressed up in hip, streaming-service clothing. Chuck Lorre (of Two and a Half Men and The Big Bang Theory fame) is an executive producer here, and it shows, from the crude punchlines to the live studio audience’s prodded laughter. (At one point during the pilot, the studio audience even lets out a TGIF-style “awwww.” What decade is this?!) 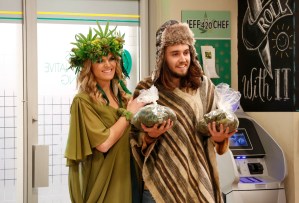 Bates plays Ruth, the aging-hippie owner of a L.A. cannabis dispensary, where her “budtenders” recommend the stickiest strains to a grateful clientele. Marijuana legalization is admittedly a timely topic, and one that’s clearly ripe for comedy, but aside from a few thuddingly obvious stoner jokes, the setting is irrelevant here. Disjointed is a generic workplace sitcom that might as well take place at a health-food store, or a chiropractor’s office. (We’ve Got Your Back, coming to CBS this fall!) The weed theme is just a sham: Even the CGI plumes of smoke that Ruth’s customers exhale are fake.

It’s a bit baffling why an actress of Bates’ stature would stoop to appearing in such a dud. (She does have a history with Lorre, having guest-starred on Two and a Half Men and Mike & Molly.) Playing Ruth gives her a chance to add another strange accent to her acting repertoire — AHS: Freak Show fans know exactly what I’m talking about — but she mostly drops Ruth’s grating Noo Yawk twang after the pilot, anyway. Disjointed‘s hacky sitcom format is a poor fit for Bates, who looks uncomfortable throughout, even appearing to read her lines off of cue cards at times. I have no doubt Bates could be hilarious and terrific in the right TV comedy. This, however, is not it.

Disjointed‘s supporting cast is mostly forgettable, because their characters are patched together from sitcom clichés. Dougie Baldwin gives off a pleasing James-Franco-in-Pineapple-Express vibe as weed connoisseur Pete, but too often, he’s just standard-issue stoner. Elizabeth Ho plays “Tokin’ Asian” budtender Jenny… and the audience inexplicably laughs when she speaks Chinese to her mother on the phone. (Is speaking a foreign language what passes for a joke here?) 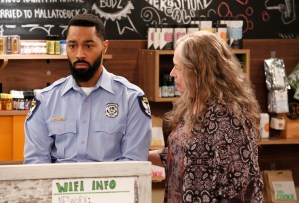 Across the board, Disjointed is marred by very broad, yell-y acting, with the cast straining to sell woeful jokes that range from tired pothead stereotypes (boy, are they forgetful!) to vulgar double-entendres. (Ruth refers to fist-bumping as “fisting.” Ha?) The show even awkwardly lurches into drama with the tale of security guard Carter (Whitney‘s Tone Bell), an Iraq War veteran suffering from PTSD. The surreal animated interludes depicting Carter’s troubled state of mind are actually pretty cool — dig those crazy colors, maaaan! — but they don’t mesh with the rest of the show at all, and quickly vanish to make room for more lazy punchlines.

With shows like this and Fuller House, Netflix seems to be trying to establish a foothold in the traditional three-camera sitcom game. Which would be fine — if these shows were any good. But Disjointed‘s failings just underline why the old-fashioned sitcom is a dying art these days. Michael Douglas actually just signed on to star in a new Netflix comedy series produced by Lorre. Mike, buddy, save yourself a lot of time and heartache: Watch five minutes of Disjointed to get an idea of what you’re in for… and then run for the hills.

THE TVLINE BOTTOM LINE: Just say no to Netflix’s Disjointed — a strained, dreadfully unfunny sitcom that squanders the talents of Kathy Bates.