Elisabeth Moss will be a top contender at this year’s Emmys, and deservedly so, for her work in Hulu’s The Handmaid’s Tale. And she might as well make plans for a return trip next year, too, based on her knockout performance in Sundance’s gritty, mesmerizing crime drama Top of the Lake: China Girl.

A sequel to 2013’s Top of the Lake, China Girl — a six-hour Australian miniseries premiering Sunday, Sept. 10 at 9/8c and airing over three consecutive nights — finds Moss’ police detective Robin Griffin back in Sydney, still guarded and on edge after the traumatic events of last season. (Yes, you need to watch Season 1 before China Girl, if only to understand why Robin is so haunted… and also because it’s great.) Soon, she has a new partner in eager recruit Miranda (Game of Thrones‘ Gwendoline Christie) and a new case to obsess over when the dead body of an Asian prostitute is found stuffed inside a suitcase on a local beach. 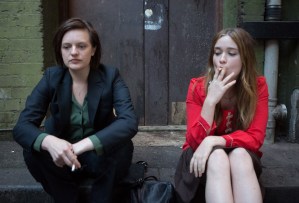 But Robin is chasing personal demons, too: She reconnects with the daughter she gave up for adoption years ago, Mary (Alice Englert), who’s now 17 and rebelling against her adoptive parents (Nicole Kidman and Ewen Leslie) with her much older creep of a boyfriend Alexander (David Dencik). It sounds like an odd fit, but Robin and Mary’s adoption story actually ends up being more compelling than the murder mystery. China Girl isn’t a by-the-numbers crime drama: It’s a human story, first and foremost, and every side trip the narrative takes is emotionally rich and insightful.

As in the last Top of the Lake, Robin also has to battle her way through a thick cloud of male chauvinism at work. The men she works with on the police force are either sleazy perverts or incompetent oafs, or both. (At a crime scene, a male cop orders Miranda to fetch his jacket, then turns to ask Robin if she’s single.) It only makes Robin’s job harder, but she soldiers on without complaint, as if she’s been dealing with idiots like this her whole life. Plus, China Girl finds time to examine the murky morality of legal prostitution (we meet a group of dorky bloggers who trade notes on their favorite brothels and whores), the perils of motherhood in all its forms, and a dozen other fascinatingly juicy themes.

It almost goes without saying at this point that Moss is terrific in this. From Mad Men‘s Peggy Olson to The Handmaid’s Tale‘s Offred, Moss seems to specialize in a stiff-lipped defiance of misogyny, and she gives Robin a steely determination. But she’s not a robot, either: Robin’s pent-up rage spills out at inconvenient times, and Moss lets us see the still-fresh wounds beneath her tough exterior. (As Robin says, she’s not only been “burnt” in the past, she’s been “deep-fried.”) It’s a stunningly vulnerable, powerhouse performance from Moss, further solidifying her status as one of TV’s finest actresses working today. 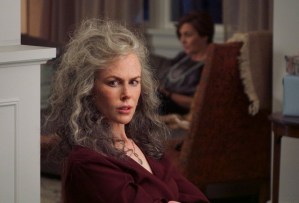 Actually, the acting is tremendous across the board, as is the directing. Quiet and meditative throughout, China Girl is gorgeously photographed; Oscar winner Jane Campion directs half the episodes and fills the frame with tiny, telling details. (Like when we see Robin’s male colleagues playfully wrestling in the background while she works, or when Robin has to weave her way through a forest of tall blonde girls sipping wine at a bar.) Kidman will likely be back at the Emmys next year, too, for her work here playing a panicked mother who feels her daughter slipping through her fingers. Christie gets a chance to show a comedic, emotional range we haven’t seen from her on GoT, and Englert is very impressive as young Mary, who’s desperate for affection and finds it in all the wrong places.

Judged strictly as a crime drama, China Girl isn’t perfect: It’s a bit exposition-heavy at first, bending over backwards to fill in viewers who didn’t watch the first season, and the various story strands tie together too easily. But the central murder mystery does build to a startlingly intense finish. (You’ll want to watch the last two hours in a row, since Episode 5 ends on a gasp-worthy cliffhanger.) Ultimately, though, China Girl isn’t just about revealing who the killer is. It’s about taking a hard, unflinching look at why we do the terrible things we do… in the hopes that maybe we won’t repeat them the next time around.

THE TVLINE BOTTOM LINE: Top of the Lake: China Girl is a triumph — a haunting, humane crime drama filled with powerhouse performances.