No show on TV does spectacle quite like Game of Thrones. And Season 7 has certainly delivered on that front, from the fiery carnage unleashed by Daenerys’ dragons in “The Spoils of War” to this week’s icy white walker melee. Fans who tune into GoT solely to see bad-ass battle scenes are surely happy with Season 7… but for those of us who also enjoy things like character development and logical consistency, this season has been a surprisingly frustrating one.

All of the nagging problems that have plagued GoT this season — implausibly rapid travels across Westeros, shockingly bad battle plans, convenient escapes — reared their ugly heads this week. Dany arrived to save Jon Snow and company just in the nick of time? Jon’s band of brothers somehow fought off thousands of wights without suffering a single significant casualty? Jon thinks bringing a wight to King’s Landing will make Cersei see the light and join the good guys? It all made precious little sense… but who cares when there are cool dragon vs. zombie battles to watch, right? (And don’t forget the undead polar bear!) 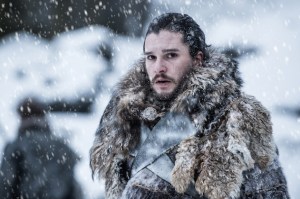 The most frequently heard line of dialogue this week? A tie between “[men shouting]” and “[grunting].” And looking back on this season, the majority of scenes could either be classified as “preparing for battle” or “battle.” Yes, we are in the final stretch here: With only seven episodes left until HBO’s epic fantasy wraps up for good, it’s like we’re watching the climactic moments of a big-budget action movie, stretched across a full season. But as a result, everything in Season 7 has felt compressed and rushed — and in the process, we’re losing the quiet, intimate moments that made this show great.

Game of Thrones has always been a cut above the usual sword-and-sorcery tales precisely because it wasn’t all sword fights and magic and dragons: It had actual well-written characters, and recognizable emotions and conflicts, and no one was safe, no matter how integral they were to the story. (RIP, Ned Stark.) Now creators David Benioff and D.B. Weiss seem to have chucked all of that aside in order to deliver a high-octane, crowd-pleasing final act. (We were promised dragons vs. white walkers, and dammit, we’re gonna get them!)

With Season 7’s breakneck pacing, Benioff and Weiss have been forced to insert absurdly convenient plot points just to keep things moving. (Oh, there just happens to be a mountain of white walker-killing dragonglass sitting underneath Dany’s castle? What are the odds?) And with all the battle scenes, the show’s personal relationships — long a GoT strength — don’t have any room to breathe. A prime example: Daenerys and Jon Snow, who just met three episodes ago, but who are now apparently ready to pledge undying loyalty to one another. (And engage in a little unknowing incest, too.) It feels like the story needs them to be together, and is cramming them together at lightning speed, hoping we won’t notice.

I hate to say this, but Season 7 of Game of Thrones has too often reminded me of The Walking Dead, where plot and logic have always taken a backseat to pure zombie-killing action. I don’t expect more than blood and guts from TWD, but I do expect more from Game of Thrones, which in years past has been one of TV’s finest dramas, with or without dragons. In Season 7, it’s just another action show… and that’s a Hodor-sized disappointment.

Do you agree that Game of Thrones has been too action-heavy this season? Or is it better than ever? Cast your vote in the comments.