TNT’s The Last Ship launched Season 4 by revealing a new threat to the globe — and thus to the Nathan James itself. Retired CNO Tom Chandler, meanwhile, did his best maintain a low profile in Greece, but a local crime lord had other plans.

Right off the bat, we learn that the Red Virus has “jumped kingdoms.” Having been effectively fended off by humanity, it is now infecting crops — the vital staple corn, to name one. The obscure African oil palm, however, has proven immune to the Red Rust, and as the action picks up, Sasha and British Royal Navy bud(/beau?) Fletcher (Dominion‘s Jonathan Howard) are trying to extract from a black market seller, Mahmoud, the location of a stolen seed stash. Alas, a shootout interrupts the meeting, landing the snitch in a coma. The Nathan James brings Mahmoud to a base in Spain to recover — setting the stage for a reunion between Danny and Kara/their kid — but even that safe harbor is comprised by an invasion of gunmen, one that leaves Slattery’s longtime friend Boylan, as well as Mahmoud, dead, while a gravely wounded Cameron Burk is sent away for a likely leg amputation/role on Designated Survivor.

Based off a spoken clue from Mahmoud, paired with a tattoo of his, the Nathan James sets course for Algeria, suspecting that a major player named Omar is sitting on the stash of seeds. But as the James nears the coast, it brushes up against “fishing nets” that actually contain an IED that kills not only the ship’s propulsion but all power, including that to the weapons systems. Having rejoined the crew for the time being, Kara gets the idea to daisy-chain some portable batteries to feed the anti-missile gun enough juice to ward off any strikes coming from the the shoreline cliffs. Vulture team meanwhile sets out to navigate the mountain’s tunnel system and neutralize the missile launcher. With the James all but a sitting duck, the crew is able to Jerry-rig a new source of forced air that restores power, allowing them in the nick of time to strike at the located launcher — just as Wolf, Sasha and Danny leap away from it, while Burk, newcomer Azima (Jodie Turner-Smith) and others shield themselves in the cave behind it. Reassembling aboard the ship, Slattery warns his crew that their downtime won’t be long, as they’ll need to swing back into action as soon as they get to Algeria. 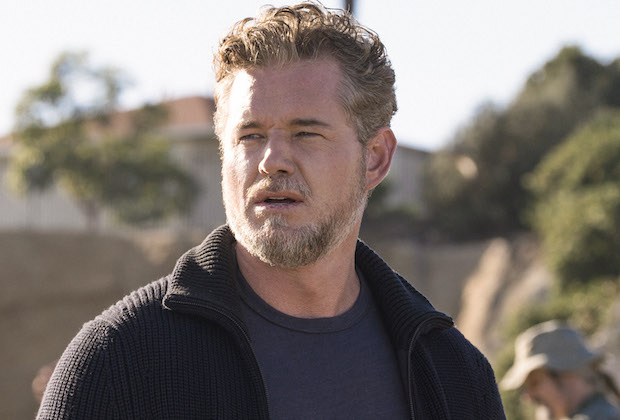 We see that Chandler for the past 16 months has been living incognito with his kids, befriending and working alongside a local fisherman, Alex, and his family. The fishing captain, Tom learns, has surmised his identity, and while he understands the desire to lay low, he also notes that there remains a battle to fight. Tom, however, has had his fill of playing hero. That said, he gets pulled into a local squabble when crime boss Giorgio (Twilight‘s Jackson Rathbone) gets a bit aggressive in exacting his protection “tax” from Alex. Giorgio also stages fight nights where locals slug it out for scraps of scarce food.

When Tom and Alex get a bit cheeky and make off with one of Giorgio’s boats/hauls, the fiery blowback costs the elderly fisherman his life. Tom in turn gets dragged into(/purposely infiltrates?) Giorgio’s gang of goons, having previously laid out his best fighter with one “lucky” punch. Arriving at Giorgio’s lavish, mountaintop digs, Chandler 1) confirms that his host is not the top guy but answers to someone, 2) sees that a pendant Giorgio wears serves as a “card key” to his office, and 3) mutually catches the eyes of Giorgio’s sensual sister, Lucia (Tyrant‘s Sibylla Deen). After Giorgio’s best fighter shames him by losing, badly, to the Greek Navy captain’s best brawler, Ares, he picks his new American recruit, “Mr. Nobody,” to tag in. A bare-chested Chandler proceeds to not only best Ares, but goes so far as to “end him” when Giorgio gives the (historically inaccurate?) thumbs-down signal.

That night, Chandler gets invited into Lucia’s chambers, where she whips up some “nostos” (a drug/tea made from Red Rust-infected weeds) and dubs her new American friend “Hercules” — before engaging in that thing that consenting, attractive adults do at night….