Jerry Lewis, who became a household name as one-half of legendary duo Martin & Lewis, has died at the age of 91.

In a statement attributed to Lewis’ family, the Las Vegas Review-Journal‘s John Katsilometes reports that Lewis died of natural causes on Sunday morning, surrounded by loved ones at his Las Vegas, Nev. home. 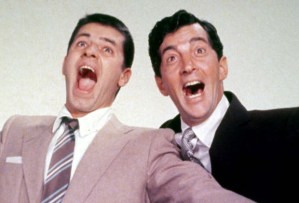 Lewis, an iconic comedian in his own right, first teamed with Dean Martin in 1946, becoming one of the most successful acts in the country before their highly publicized split in 1956. They appeared together in such films as My Friend Irma, The Caddy, The Stooge, Artists and Models and Pardners. Lewis would continue to appear in motion pictures throughout the 1960s, most notably The Nutty Professor, The Bellboy and Rock-a-Bye Your Baby.

In 1966, Lewis began hosting the annual Muscular Dystrophy Association telethon. He would serve as its host until 2010, raising over $2.45 billion over 44 years, and served as MDA’s national chairman through 2011. In 1977, his charitable efforts earned him a Nobel Peace Prize nomination. In 2009, he was honored with the Academy of Motion Pictures Arts & Sciences’ Jean Hersholt Award.

Lewis’ TV credits included episodes of Wiseguy, Mad About You, Law & Order: Special Victims Unit and The Simpsons. Additional film credits included Martin Scorsese’s 1983 effort The King of Comedy and the 2013 indie Max Rose. He continued to work through 2016, making his last on-screen appearance in the Nicolas Cage film The Trust.