Warning: This post contains spoilers for Sunday’s Game of Thrones.

Fire met ice in a big way on Sunday’s Game of Thrones… but it wasn’t Dany’s fire-breathing dragons that ultimately saved Jon Snow from the chilly clutches of the Night King.

Instead, Benjen Stark — a character we last saw in the Season 6 finale — swooped in to rescue Jon Snow just as the undead army was closing in. Benjen sacrificed himself (we think), allowing Jon to take his horse to escape back to Eastwatch. But saving Starks from certain death is kind of what Benjen does. After all, he is a Stark. 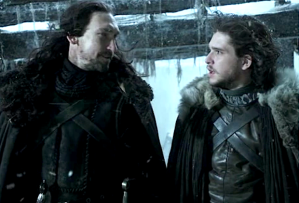 We first met Benjen way back in Season 1 (played by Ripper Street‘s Joseph Mawle), when he was still a living, breathing, de-iced human, and brother to Jon’s father Ned Stark. Benjen’s the one who first invited Jon to join the Night’s Watch, serving as a mentor to his young nephew. But when Benjen ventured north of the Wall one day, he vanished, his horse eventually returning to Castle Black without him. And the next time we saw him, he was much different. 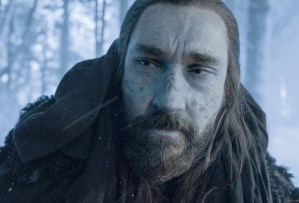 In Season 6, when Bran Stark and Meera were beyond the Wall and surrounded by a horde of wights, a hooded figure rode up swinging a flaming chain, pulling the two onto his horse and riding them away to safety. Later, the hooded figure revealed himself as Benjen and filled Bran in on what happened to him: He was attacked by white walkers, who stabbed him in the gut with an ice sword and left him for dead. The Children of the Forest found him and saved his life by plunging a shard of dragonglass into his heart… but it left him sort of half undead, with pale, blue-ish skin. (That still beats fully dead, though.)

He’s dead enough that he couldn’t follow Bran and Meera when they passed through the Wall in the Season 6 finale. But he vowed to continue battling the undead on the north side of the Wall: “The Great War is coming… I still fight for the living. I’ll do what I can, as long as I can.” And indeed, he did. In the final shot of him this week, it appeared that he was killed by that swarm of wights — but then again, we’ve seen him survive their attacks before. So maybe this isn’t the last we’ve seen of Uncle Benjen, eh?