Hey, remember when celebrity chef Emeril Lagasse had his own NBC sitcom that got yanked off the air after a couple months? Well, Carrie Preston does… because she was in it. 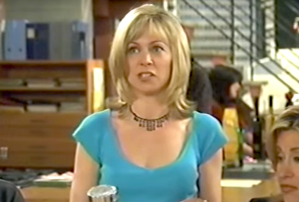 A decade before she won an Emmy for The Good Wife, Preston played kooky (and blonde!) food stylist B.D. Benson on Emeril, which lasted just seven episodes in the fall of 2001. Starring Lagasse as (what else?) a TV chef, Emeril was created by Designing Women alum Linda Bloodworth-Thomason, with a supporting cast that included TV veteran Robert Urich and future The View co-host Sherri Shepherd. But critics were not kind: The L.A. Times called it “a thudding half-hour of broad nonsense” and “pretty dreadful stuff.”

“It’s just hard for a multi-camera show: Either they hit big, or they don’t,” Preston (currently starring as Polly on TNT’s Claws) says diplomatically about Emeril today, adding that “there was a bit of a regime change at NBC” that left the show without any defenders at the executive level. But the show’s biggest problem may have been a tragic case of bad timing: Emeril premiered on September 25, 2001 — just two weeks after the September 11th terrorist attacks.

“We were in the middle of shooting that show when I went back to New York for our hiatus week, and that was September 10,” Preston remembers. “So I ended up driving back across country. All the flights were grounded. The private planes were full. So I rented a car with a friend — I got one of the last cars in Manhattan — and we drove back out to L.A. because we were going to tape again the next week. So whenever I think of that show, it’s kind of a bittersweet thing.”

Emeril didn’t even last until Thanksgiving, but Preston is still happy she got to be on a network sitcom — any network sitcom — as a young actress: “It was certainly something that I was grateful for at the time, because I had mostly been doing theater, so it was really nice to have a gig that afforded me a little cushion.” And having a world-class chef as a co-star certainly had its advantages.

“One time, we came into rehearsal,” Preston remembers, “and Emeril came in, and he’s like, ‘Hey guys, I couldn’t sleep last night, so I made some gumbo.’ And then he slammed down this big vat of gumbo for all of us.” Another time, right before they taped an episode, “he came over to us on set: ‘Girls, girls, you guys want some porterhouse?’ He had a working kitchen on set… It was definitely one of the perks of the job.”