“We need to kill the lights!”

“How do you even know they’re on?”

Jessica Jones is super-fascinated with the blind lawyer she just met, and that sort of fun familiarization makes Marvel’s The Defenders the small-screen team-up we deserve after five seasons’ worth of Netflix superhero series.

Arriving Friday, Aug. 18 and starring Daredevil‘s Charlie Cox, Jessica Jones‘ Krysten Ritter, Luke Cage‘s Mike Colter and Iron Fist‘s Finn Jones, the eight-episode series spends a short while touching base with each of its heroes — Matt and Karen post-mortem his spilled secret, Jessica waves off Trish’s ideas to play up her hero status, Luke surveys the work left to be done in Harlem upon his prison release, Danny’s literally on his way back from K’un-Lun — while planting seeds for the seismic event that will eventually unite them in a cause.

(Reading the above, one may wonder going into this what is the “prerequisite viewing” of any Netflix/Marvel series. Outside of a rudimentary knowledge of each character’s unique abilities, I’d only recommend a passing familiarity with Daredevil Season 2, as relates to The Hand as an evil organization. I won’t make you watch Iron Fist.)

It only takes the bulk of two episodes to start weaving Jessica, Matt, Luke and Danny into one another’s lives, as their seemingly distinct paths start to converge. The banter between Jones and Murdoch, sampled above, is truly an ongoing highlight, evolving from slightly adversarial to a degree of awe. Luke and Danny’s own “meet cute” has been well-spoiled by the very first trailers, though it does deliver a visually exciting examination of the unstoppable force paradox. 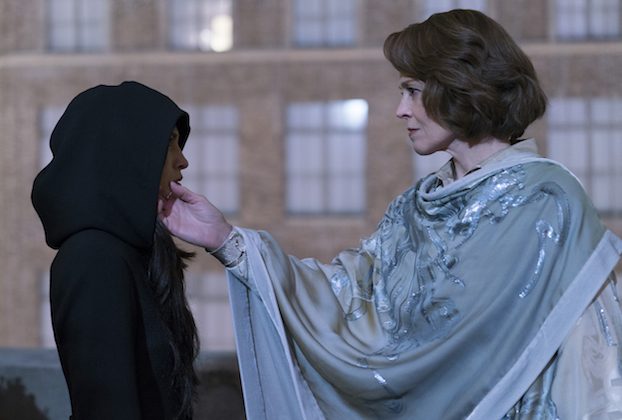 New to the scene is Alexandra, an enigmatic and elegant adversary brought to life by filmdom’s Sigourney Weaver. Whether absorbing a private performance of classical music, holding a familiar face at katana-point or casually deflecting the blows of the masterful (and resurrected!) Electra (Elodie Yung), Weaver brings a cool and collected vibe to the role, not even flinching when one of the heroes seems to have gotten the drop on her organization.

Fight scenes are economically parsed out across the first couple of episodes, mainly serving to educate/remind us of the special something each hero brings to the table. Not able to achieve the (expensive) scope of, say, an all-out, multi-pronged Avengers melee, the group fights aren’t nearly as grand but enjoyable in their own right. (And for those who queued up Iron Fist, know that Jones has gotten better at selling his punches/kicks and doesn’t seem to be doubled quite as frequently.)

But again, just as when the Avengers first assembled, much of the joy here is seeing disparate personalities get to know each other (the Immortal Iron Fist’s dragon-costarring origin story prompts Jessica to ask if he’s “on lithium”) and reluctantly embrace the T-word — team. (As Luke puts it, “I’m not looking for superfriends,” surely to the delight of Marvel’s lawyers.) Matt has his reasons for not wanting to fight this grand fight, as does lone wolf Jessica, while impervious Luke is more inclined to take a bullet (…or 100) in the name of a greater good that just might happen to save one young life.

THE TVLINE BOTTOM LINE: After engaging in their own private wars, Matt, Jessica, Luke and Danny find (comedic) strength in numbers as The Defenders.