Here’s a sentence you would only hear while watching So You Think You Can Dance: “You guys are playing aliens that have been transported into human bodies.”

Yep, it’s safe to say that things got weird on the second live broadcast of Season 14 — and not just because of the extraterrestrials. In the course of two hours, the Top 10 couples took the stage once more to dance for America’s votes, resulting in more than one out-of-this-world routine (and a few that missed the mark).

All of it led up to the season’s first live elimination, which was bestowed upon a contestant who was just beginning to mine his or her potential. Sigh. Read on for a recap of Monday’s performances:

* Mark Villaver and All-Star Comfort (Jazz) — The live performances have only just begun, so I don’t want to overestimate Mark’s shot at winning the whole thing — but boy, has he made a strong case for himself in his last two dances. Thus far in Season 14, Mark has shown an innate versatility, an ability to slide into new styles and just fit there. (This also applies to the groovy, disco-themed opening number of Monday’s broadcast, where Mark couldn’t have looked more comfortable.) Not only did Mark and Comfort powerfully hit every beat of their jazz number, but their chemistry easily crossed the bridge from last week’s light-hearted hip-hop to this week’s emotionally intense routine.

* Lex Ishimoto and All-Star Gaby (Argentine Tango) — To borrow a phrase from Johnny Castle’s vernacular, Lex had an unfortunate case of spaghetti arms (and legs) during this Argentine tango — but the routine wasn’t without its highlights. Those sensual, controlled walk lifts? I blush. Still, a quality Argentine tango stems mostly from strong, quick footwork, and Lex’s series of flicks and kicks near the end of the piece just weren’t sharp enough.

* Kiki Nyemchek and All-Star Jenna (Hip-Hop) — As soon as I saw Jenna and Kiki hit the stage with green hair, I was instantly reminded of this Suicide Squad-inspired routine that Jenna performed with James Hinchcliffe on Dancing With the Stars — and, unfortunately, I’d rewatch that waltz a dozen times before I cared to return to Jenna and Kiki’s hip-hop. Don’t get me wrong: Kiki has made so much improvement since that dreadful hip-hop attempt at The Academy. But throughout Monday’s performance, my attention always turned to Jenna, who was hitting much harder and committing to her character much better than Kiki did in those crucial 90 seconds. 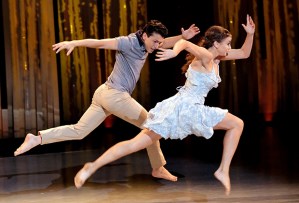 * Sydney Tormey and All-Star Paul (Contemporary) — Ballroom dancers have a historically hard time clicking with SYTYCD voters, and I fear that Sydney isn’t long for the Season 14 world, given her middle-of-the-episode placement for the last two weeks. But even if she’s not destined to take home this year’s title, Sydney is showcasing some wonderful versatility with Paul, this time trading in the plastered-on grin of Latin ballroom for heartfelt vulnerability and gorgeous lines.

* Logan Hernandez and All-Star Allison (Jazz) — It sorta seems like Logan is being set up to fail this season, doesn’t it? First, his All-Star partner was injured in Week One, forcing him to brave the first live show with a new dancer. Then, this week, he’s saddled with an obscure, emotionless jazz routine that has little chance of resonating with viewers in the same way that a Stacey Tookey contemporary piece might. That’s not to say Logan didn’t deliver in his performance with Allison; in fact, his quasi-breakdance combination in the middle of the number was a highlight of the evening. But in a season as stacked as this one, I’m not sure Logan has been given an opportunity to really shine just yet.

* Kaylee Millis and All-Star Cyrus (Hip-Hop) — After turning in a lackluster animation duet with Cyrus at The Academy, Kaylee completely redeemed herself with Monday’s hip-hop, in which she and Cyrus played aliens who had been beamed into human bodies. Even in a style that Cyrus excels at, I couldn’t take my eyes off Kaylee during the routine — and not just because she briefly got dragged across the floor while standing on her head, or because she spent a few seconds hovering off the ground, atop Cyrus’ back. Yes, the tricks were cool, but it was Kaylee’s comedic timing, command of the quick choreography and total ease on stage that were even more captivating.

* Taylor Sieve and All-Star Robert (Broadway) — Even though the judges didn’t have a single syllable of criticism for Taylor and Robert, this Broadway routine was certainly weaker than last week’s stunning contemporary — and given the bar they set for themselves last Monday, that was hardly a surprise. The pair fell ever-so-slightly out of sync at key moments of the piece, and the choreography didn’t seem to come as naturally to Taylor this time around. That said, Taylor has a wonderfully expressive face, and the longing she felt for Robert’s character was palpable throughout the number. At this point in the competition, it won’t be the occasional misstep that dooms this duo; it will be the judges’ relentless praise and refusal to offer helpful notes.

* Koine Iwasaki and All-Star Marko (African Jazz) — African jazz has long been an Achilles heel for SYTYCD contestants, given the intricate, fast-paced choreography that Sean Cheesman delivers every season. But Koine and Marko used this opportunity to build on last week’s chemistry, fearlessly entangling their bodies at every turn and maintaining a steely gaze from beginning to end. Here’s something to file under Pleasant Surprises: This frenetic piece, which could have veered into manic, messy territory, ultimately became one of the evening’s most fun to watch. 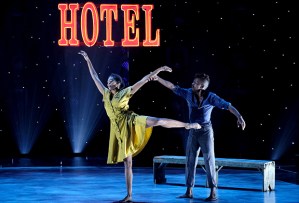 * Robert Green and All-Star Jasmine (Contemporary) — Contrary to Nigel’s belief, I found Robert and Jasmine’s performance to be one of the most moving of the night. It’s easy to get caught up in “prettier” routines, like Sydney and Paul’s contemporary piece, which was all about elegance and light feet. Instead, Robert and Jasmine delivered a routine that was heavier, both in footwork and in emotion, and they did so with an authenticity that some other Season 14 couples have yet to master. Yes, it was a little rough around the edges, technically speaking — but the passion displayed on that stage more than made up for any missteps, Nigel.

* Dassy Lee and All Star Fik-Shun (Bollywood) — There’s something about Dassy and Fik-Shun’s partnership that just isn’t clicking yet, and it makes me so sad. Of course, Bollywood is an insanely difficult, detail-oriented style — but choreography aside, it has now seemed on two occasions that Dassy and Fik-Shun are forcing their goofy, light-hearted dynamic. Both of these dancers have such talent in the hip-hop realm, and perhaps they just haven’t been given the right routine yet — but I worry they’re running out of time to find their mojo as a couple.

With that, I hand it over to you. Were Robert and Jasmine the right choice for Elimination No. 1? Drop a comment below with all of your thoughts.