It’s fitting that Claws‘ season finale started out in an amusement park, because hot damn, this thing was a roller coaster. (And not just for Roller.) 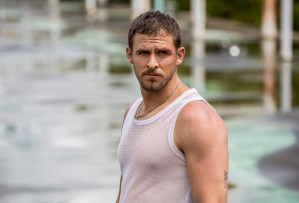 JUANDA, WE HARDLY KNEW YA | We pick up with Desna and Roller getting chased through that abandoned theme park by the Russians. Luckily, the nail salon crew (minus Jen) and Dean have tracked Desna down using her phone’s GPS, and Desna hops into their waiting van, just avoiding Roller’s clutches. As they peel away, he yells at Desna that he’ll kill her with his bare hands. A real charmer, that guy.

Desna frantically tells the crew that the Russians might be coming after Jen’s kids. And where’s Jen? In bed with the square-dancing Jew (gasp!), ignoring Desna’s texts. Meanwhile, Roller reports back to Uncle Daddy and Bryce that he killed one of the Russians and advises Bryce to “get the girls.” Uncle Daddy responds by calling his wife Juanda and declaring: “We are at war.”

Juanda likes the sound of that… but she does not like what sounds like an intruder sneaking into her home. She grabs her gun, only to discover it’s just her grandkids horsing around in her wardrobe. She stashes the girls in her SUV and goes back inside… to find a Russian hitman waiting for her. She actually gets the better of him in a fight, cracking him over the head with a nearby statue (go, Juanda!), but her luck runs out when another Russian walks in and shoots her in the gut.

Uncle Daddy arrives home to find Juanda bleeding out on the floor. (She tells him, “I got one of ’em,” and he replies, “That’s my girl.”) She says Bryce’s daughters are safe in the SUV, but Bryce only finds one of the two girls there, with “Bring Us Roller” written on her forehead. (Yikes.) Daddy and Juanda share an intimate moment before she slips away, telling him with her last breath, “You gonna hurt ’em. Hurt ’em real bad.” He gets up with a menacing scowl on his face. (Man, Uncle Daddy’s been through a lot of family trauma this season, hasn’t he?)

I WANNA FEEL THE HEAT WITH SOMEBODY | Bryce calls Desna to tell her his daughter Brienne is missing — “The black one, Poll,” Desna tells Polly — but they still can’t find Jen. Virginia, though, thinks she might be with that square-dancing Jew, and sure enough, Desna finds a post-coital Jen at his place. “Don’t judge me,” she tells Desna, before Desna breaks the news about Brienne… which Jen blames Desna for, somehow. This is no time for fighting, girls! 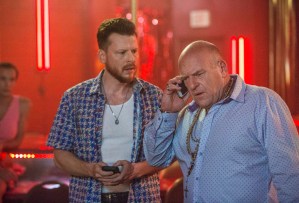 Uncle Daddy gets a call from Russian mob matriarch Riva, who confirms she has Brienne, and wants Roller in exchange. And she has a reason to hold a grudge: Roller apparently impregnated Riva’s underage niece, who Roller refers to some “dirty little Russian bitch I busted a load in.” (Again, a charmer.) Plus, Roller admits he’s $360k in debt to the Russians, and doesn’t have the money to pay them back. Daddy’s furious: “I raised you, and you betrayed me.” This leads to a (hilarious) three-way wrestling match between Roller, Uncle Daddy and Bryce while Whitney Houston’s “I Wanna Dance With Somebody” blasts over the strip-club speakers. God bless you, Claws.

But the laughs stop when Roller tells Daddy that it was Desna and Virginia who tried to kill him. Daddy sticks a gun in Desna’s face, but she stands up to him, calling Roller a “bad dog,” and volunteers to go talk to Riva. When Desna goes to see the Russian mob mom, Brienne is doing great, actually: riding a horse in full equestrian gear. Riva wants Roller’s head in exchange for handing Brienne back, though, and turns up her nose at Desna’s offer of $250k. She also calls the Dixie Mafia a bunch of “inbred monkey boys,” and really, after that strip-club fight, can you blame her?

Finally, Desna offers Riva 50 percent of all of Uncle Daddy’s business ventures, including her nail salon, in exchange for sparing Roller. Intrigued, Riva asks if Daddy’s onboard with this. “You let me worry about that side,” Desna replies. 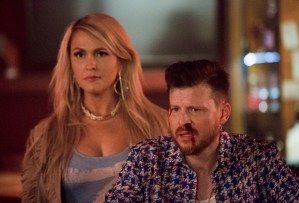 I LIKE MY OATMEAL LUMPY | Bryce and Jen have an ugly fight when he confronts her about her affair with the Jew for Jesus. He apologizes, but in the worst way possible: “I pushed you into being a whore.” She slaps him, and he storms off. In better relationship news: Polly and Dr. Ken have a midday liaison at a local motel, but it’s interrupted when Polly spots her teen neighbor Marnie outside, her mom selling her to an Elvis-impersonator pimp. (This is Claws, y’all.) Polly rescues Marnie, forking over cash to free her and bringing her into the motel room for a maternal snuggle with her and Dr. Ken. It’s sort of sweet, I guess?

Desna brings the 50-percent offer to Uncle Daddy, who’s predictably unpleased. But when everyone starts arguing about what to do next, he fires a gun into the air to shut them all up. “You boys is the nearest thing to my heart now,” he says before telling Desna that Riva can have anything she wants, “but I want a sit-down… immediately.” And he gets one, in some kind of retirement home where a bunch of old ladies are dancing to “The Humpty Dance.” Again, Claws, bless you for existing. Never change, OK?

Riva has Brienne, and she won’t accept the 50 percent anymore; she just wants Roller’s head on a spike. Roller does the surprisingly noble thing and hands himself over, so Jen and Bryce get Brienne back. Riva has a new offer: She gets 100 percent of Daddy’s businesses, or Roller dies right here. Daddy fumes, but he agrees, and begins to sign his life over, when… a guy walks over and holds a gun to Riva’s head. He’s Daddy’s henchman, and it looks like Daddy has the upper hand… until that henchman turns his gun on Daddy. (Riva paid him more, apparently.) But then Roller overpowers the guards holding him and reenters, pointing a gun at Riva! The Dixie Mafia wins, right?

Well, maybe not: One of the old “Humpty Dance”-ing women pulls out her own gun and holds it to Roller’s temple. Uncle Daddy marvels: “What kind of sick s—t is this?” Suddenly, all the old ladies are armed and holding guns on Daddy and his crew. A triumphant Riva turns to Desna: “Now we can talk.”

Back at the new nail salon, Desna’s crew is setting up for the grand opening the next day. Desna apologizes to Jen, and they seem to bury the hatchet (finally). But Desna has some bad news: She has to keep working at the old salon and laundering cash for Riva. She hands the keys to the new salon to Jen, but they refuse to abandon her: “We go where you go,” Virginia says. The ladies laugh about the long rap sheets they’ve piled up between them before sharing a giddy five-way finger wiggle. So it’s back to the strip mall next season, I guess.

But wait, there’s more! Virginia’s washing up in the bathroom, and we see she has a pregnancy test… and it’s positive! Are you ready to be an aunt, Desna?

But wait, there’s even more! Uncle Daddy leads Roller and Bryce into a dimly lit warehouse, where bad-looking dudes are packing up bricks of drugs. Daddy approaches a shadowy figure who seems to be in charge, asking him for help with handling Riva. Holy s—t! It’s Dr. Gregory, that nice gentleman Desna was seeing! He’s a drug lord?! He asks Daddy, “What do you have in mind?” Alright, Season 2, we see you.

What did you think of the Claws season finale? Give it a grade in our poll, then hit the comments with your post-finale thoughts.