For the feathered family featured in Disney XD’s DuckTales revival, the real mystery begins at home.

Sure, DuckTales — which originally aired from 1987 to 1990 — seems like a simple concept on the surface: Three color-coordinated duck brothers move in with their miserly uncle, the duck version of A Christmas Carol‘s Ebeneezer Scrooge, whom they accompany on a number of perilous adventures. But beneath the show’s adorable, big-eyed facade lurks a slew of disconcerting questions, including: Where are these kids’ parents?

“It is something we’ve thought about,” Ben Schwartz, who voices middle brother Dewey Duck, admits to TVLine. “And that question is something the nephews are inquiring about as well. … The characters do wonder where they came from, and they’re very into exploring that.”

(For what it’s worth, a lazy-to-average Google search will tell you that the boys’ mother is named Della, but you won’t find much else about her. Nada on their father.)

Danny Pudi, who voices eldest brother Huey Duck, also notes that the boys will have more distinct personalities, versus the ducks from the original series… who all pretty much sounded the same.

“They’re really trying to differentiate each of the ducks now,” Pudi explains. “We’re together all the time, so it’s fun to do the voices and figure out who’s who.”

The creative team behind the new DuckTales has also spent time thinking about which other characters from the greater Duckverse — which is a thing, so get into it — they’d like to incorporate. 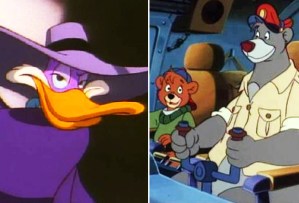 “Darkwing Duck exists in this universe, which means he exists in our show,” Schwartz notes. “We don’t know what his presence will be, but we do have the ability to put [him in it]. And if you have Darkwing Duck, you may also be able to have characters from Goof Troop. We don’t know who! Once we start playing with the shows from the Disney Afternoon and all the characters in the Disney gauntlet… Let’s just say that anything you’ve seen in the old show, anything you’ve seen from that universe, if it’s possible to put it in, Frank [Angones] and Matt [Youngberg] will try to find a way to do so.”

Both Schwartz and Pudi, for the record, would love to see TaleSpin — which starred inexplicably humanized versions of Jungle Book characters — weave its way into the show.

But no matter which outsiders end up relocating to Duckburg, Pudi reminds us that DuckTales will always be a story about family — albeit one made up entirely of ducks and secrets.

“That’s the whole spirit of the cartoon,” he says. “It’s about the family, and these 12-year-old boys who are trying to figure things out. It’s funny and it’s adventurous, but there are also a lot of questions.”

The new DuckTales kicks off Saturday on Disney XD with a one-hour special, airing for 24 consecutive hours, beginning at midnight ET. Will you be checking it out? And what other burning questions about the ducks might you have? Drop ’em all in a comment below.