We’re almost at the end of Claws‘ first season… and we still don’t exactly know who Polly is, do we?

With that sweet smile and preppy sweater tied around her neck, Polly — as played by Emmy winner Carrie Preston (The Good Wife, True Blood) — seems like a picture-perfect Southern belle. But appearances can be deceiving: She’s also a liar and an ex-con who’s stuck wearing an ankle monitor after serving time for identity theft. (And as Virginia learned this season, if you cross one of Polly’s friends, she will not hesitate to cut a bitch.) So who is she, really? 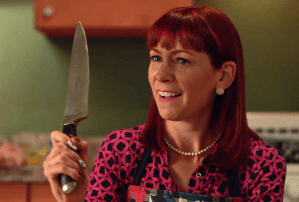 “I don’t know if we actually do have a total handle on her” yet, Preston admitted to TVLine in a chat about her outrageous, addictive TNT drama (Sundays, 9/8c). “I think it’s like peeling an onion: One layer reveals something more juicy underneath.” And those juicy layers are what convinced Preston to play Polly, she says: “I found her intriguing, and I didn’t know where the character was going to go, and that’s always exciting: to have a character that is an enigma.”

When Preston initially spoke with Claws creator Eliot Laurence and the writers about Polly, she remembers, “they said something like, ‘Her past is going to be way more interesting than the fiction she creates for herself.’ So I thought, ‘Alright, I’m in!'” And with Claws already scoring a Season 2 renewal, we’ll have more time to dig into that checkered past of Polly’s, Preston hints: “She must have many, many past lives that maybe we’re going to get to explore as the series goes on.” 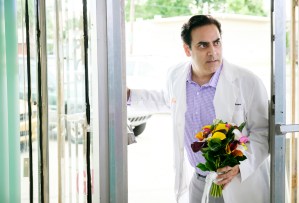 Another thing we’re still exploring with Polly this season: her awkward love affair with frantic pharmacist Dr. Ken (Jason Antoon). Preston thinks the two oddballs “might be finding some kind of a kindred, quirky connection” together… and she doesn’t rule out an actual relationship that goes beyond illicit shower-stall sex, either. “I think he’s starting to show her that he’s going to be able to give her something that she hasn’t had before.”

In real life, Preston is married to fellow Emmy winner Michael Emerson (Lost, Person of Interest), who made a hilarious cameo in last week’s Claws as New Age-y crime boss Ted. Preston remembers when the producers approached her about casting Emerson, “I started jumping up and down, I was so excited. I was like, ‘Not only is it OK with me, I’m thrilled! And I know he will be, too!'” She likens his brief Claws cameo to her own one-off guest spot on Lost: “I just came in and went away, but I got to then be a part of the mythology of that show, and now Michael will be a part of our history.” 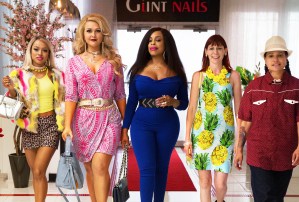 Putting the men aside, though, the key to Claws is the undeniable chemistry between “the crew,” aka the five women who work together at the nail salon owned by Desna (Niecy Nash). “It was a bit magical the first time we were all in a room together,” Preston remembers of their first table read as a cast. “There was an energy in the room that everyone still talks about… we just felt this sense of connection and camaraderie.”

Preston credits the show’s writing with providing the foundation for that chemistry: “We all get to bring our own unique energies and experiences to the material, and the material really elevates us.” And the connection between the five actresses continues off-screen, too, she says. “We’re all going to get together and watch the finale on Sunday… we have a text thread that’s going 24/7,” she adds with a laugh. “It’s really a wonderful synergy of spirits, and everyone’s really rooting for each other. It’s so lovely.”

So what can fans expect to see on Sunday’s season finale, which picks up with Desna and Roller running for their lives in that abandoned amusement park? “There are bigger forces at play that Desna is going to be going up against,” Preston hints. “There’s going to be a lot left hanging as to what’s going to happen with her and the crew, and how they’re going to navigate their way out of the prickly situation.” Well, it wouldn’t be Claws without a prickly situation or two, now would it?

Got thoughts on this season of Claws, or predictions for Sunday’s finale? Drop ’em in a comment below.