Picking up shortly after last week’s tense Liza/Charles confession, Wednesday’s Younger served up a pair of puckers that are sure to have some tongues wagging right about now. 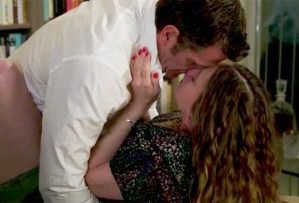 Let’s start with the kiss we all saw coming: Following an all-too-real sex dream about Charles — which I’m sure was so difficult for Liza, and my heart totally goes out to her — the two found themselves burning the midnight oil (alone!) at Empirical, an opportunity Liza seized to ask her boss about the whole “Why aren’t you dating me?” incident.

What followed was a series of glorious double entendres (“It’s probably hard by now,” Liza said about Charles’… cupcake), awkward observations (“You seem a little jumpy,” he noted), and a whole lot of making out. Off came the tie, down came the buttons, and in came… the janitor? Yes, unfortunately, Charles is just as bad about locking his office door as he is about remembering that the walls are literally transparent.

But while Charles and Liza’s latest kiss went down in fumbly flames, there was one moment that really intrigued me. “I have to tell you something,” Liza said between kisses, to which Charles replied, “Don’t talk. All we do is talk.” Question: Was she really about to tell him her big secret? Did she think that wouldn’t totally kill the mood? That’d be the equivalent of, like, 15 janitors walking in! 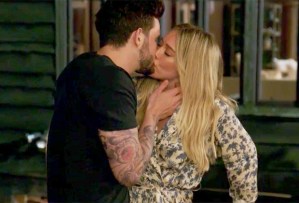 Now for the other kiss we all saw coming: Lauren may have been annoyed about Josh crashing her girls trip with Kelsey, but she changed her tune the minute she caught wind of the sexual tension between her companions. As it turns out, Lauren is pretty much the captain of the Josh/Kelsey ‘ship, at one point declaring, “I have been ‘shipping you two since you moved in together!” (As for the concept of “pity clitty,” I have no comment.)

And although Lauren wasn’t there to savor the fruits of her ‘shipping, Josh and Kelsey indeed locked lips after a bit of booze-fueled bonding. More specifically, they bonded over their shared history of dating horrors. (Zane, Colin, Liza, Montana, etc.) “You are going to bounce back just fine, all right?” he told her. “You’re one of the strongest people I know.”

As for the kiss, which lasted for a total of seven seconds (not that I counted or anything), it was… fine. There was plenty of eye-humpy buildup and hands-on-face action, but it was all over pretty quickly. “It’s not crazy,” Kelsey told him. “It’s just not right.” Josh concurred.

OK, time to weigh in: Was Liza and Charles’ messy in-office encounter worth the wait? And how are we feeling about Josh and Kelsey? (For the record, I’m way less opposed to them hooking up than I used to be.) Drop a comment with your thoughts below.