AT&T Audience Network put Mr. Mercedes in gear this Wednesday night, premiering its adaptation of the 2014 Stephen King detective novel. Did it leave you ice screaming for more?

Adapted for TV by David E. Kelley (Big Little Lies), Mr. Mercedes opened with the titular character’s masterstroke massacre, in which someone donned a clown mask before putting the pedal to the metal and running over… and over… and over… a crowd of people who were camped out for a job fair, 16 of them, a baby included, left dead.

Two years later, Bill Hodges (played by Harry Potter‘s Brendan Gleeson) — one of the detectives who unsuccessfully worked that case — is struggling with the (forced) retirement life. He drinks a lot, sleeps a lot, doesn’t bathe a lot, exercises none. And when he isn’t puzzling over what to do about the left-handed compliment-based overtures made by his spry-for-her-age neighbor Ida (Two and a Half Men‘s Holland Taylor), he’s chiding the neighbor kids for lobbing their street hockey balls into his untended landscaping.

Bill’s quiet world is roused by a strange email titled “MISS ME,” which when opened unleashes a video that sports the same smiley face sticker associated with the “Mr. Mercedes” crime scene and taunts the detective with gory and whorey imagery, usually at the detriment of the many victims. Bill enlists Jerome (Moonlight‘s Jharrel Jerome), the computer-savvy lad who mows his lawn, to try to uncover the sender’s identity, as well as not-very-subtly picks the brain of his former partner Peter Dixon (Scott Lawrence), still an active detective. He even sneaks into the evidence lot to get a fresh look at the dusty Mercedes that caused so much loss.

Concurrent with all this, we get a peek into the sad world of Brady Hartsfield (Penny Dreadful‘s Harry Treadaway), an off-putting employee at Supreme Electronix. There, he and coworker Lou (UnREAL‘s Breeda Wool) toil under the overly watchful eye of Robi (Robert Stanton), their geeky boss who seems to regularly catch Lou, a lesbian, confronting customers about their homophobia. At home, the premiere barely scratches the surface of Brady’s special relationship with his trashy mom Deborah (Magic City‘s Kelly Lynch), who despite keeping her boy… close… remains oblivious to that which he works on behind a locked door in their basement, where he crafts the videos with which he is taunting Detective Hodges. 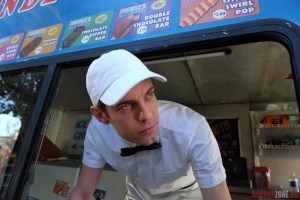 At episode’s end, Bill pays Supreme Electronix a visit to outfit his home with security cameras. His path does not cross there with Brady’s, and as the hour comes to a close there is another uncomfortably close call, when Bill finds a “smiley face” tennis ball on his lawn, while Brady in his second job — as the neighborhood ice cream man — grins from across the sidewalk…..

Did Mr. Mercedes slay you with its premiere?