Is Arrow‘s Felicity going into business? What drama is Grey’s Anatomy prescribing for Jo? What can Rumbelle fans expect from Once Upon a Time‘s “reset”? Is Criminal Minds‘ Reid a changed man? Read on for answers to those questions plus teases from other shows.

There has been a lot of hinting and build-up to Arrow‘s Felicity starting up her own company, Smoak Tech. Are there plans for this in Season 6? —Aurora
“That was something we wanted to do last year, and then we got sort of seduced by the Helix storyline,” co-showrunner Marc Guggenheim explained to me. In Season 6 (premiering Thursday, Oct. 12), “I would say that people wanting that storyline will be happy, but for reasons that I think will be very obvious, it can’t be called Smoak Technologies. And all those clever readers who are like, ‘That’s because she’ll be changing her last name to Queen,’ it’s not Queen Technologies, either.”

Have anything new to share about Arrow‘s Slade sticking around? —R.J.
It appears Oliver will make good on his offer to his frenemy, in trade for his help against Adrian Chase, seeing as the CW series is currently seeking an Aussie lad to fill the guest-starring role of an “introverted, moody and naturally athletic” teenager.

Will the Grey’s Anatomy writers finally dive into Jo’s storyline this season? Will Jo Wilson find her mentor? And isn’t she due to take her boards soon? —Burcu
“We will absolutely explore Jo’s story more,” Camilla Luddington told me at TCA when I hand-delivered your Qs. “I know that with the domestic violence storyline, we want to show the spectrum of emotional damage that can do to someone — what their triggers may be, how it affects past and future relationships, the details of what she experienced — and hopefully show recovery and healing. It will be very intense to play but I feel honored to be given the opportunity to tackle something so complex.” As for the mentor matter, although Callie is now gone, “this season Jo may feel inspired by someone again,” ventures the actress, who also has heard “rumblings” that Jo will (finally) brave her boards in Season 14.

I have a question for Once Upon a Time: Can Adam and Eddy tease Episode 4, which is focused on Rumple and brings back Emilie de Ravin? —Liza
When I delivered your question, Adam Horowitz described the episode titled “Beauty” as “hugely romantic,” while co-creator Eddy Kitsis said, “It’s our favorite Rumbelle story since ‘Skin Deep.'” 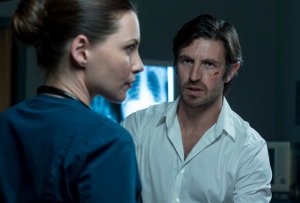 on The Night Shift? —Amber G
TC may be back, but his feet will be shuffling — and that will trigger a talking-to from his ex. “Jordan says to him a version of, ‘You’re always looking on the other side of the street. Stop thinking about that,'” showrunner Jeff Judah previews. “But that is just TC — wherever he is, he wants to be someplace else. And in the last several episodes, he’s torn between staying in the hospital and that family, and the new family that he’s created at the Syrian border.”Bonus scoop: With Mark Consuelos bound for Riverdale as a series regular, by season’s end “There will be closure” with his new character, Cain, Judah promises.

Who can we expect to see back on NCIS this fall? —Dedra
Co-showrunner Frank Cardea says, “Joe Spano is coming back for an episode” as Fornell, while Robert Wagner Jr. is set for yet another encore(/his annual visit?) as DiNozzo Sr. 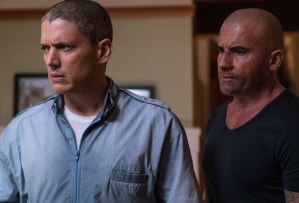 continue? —Dayo
“[There is] nothing that we are currently planning on, but we are always interested in new angles on the stories that come out of our library,” Fox entertainment chief David Madden told TVLine at TCA. “If the producers have a thought about how to explore another iteration of it, we’d be excited to talk.”

Obsessed with Lucifer! In Season 2, we saw mythological elements. Will they be a big part of Season 3? —Maria
Looks that way, seeing as the Fox series is casting the recurring role of what is being dubbed “Sinnerman,” a slightly depraved criminal mastermind whom Lucifer suspects of kidnapping him at the close of Season 2.

Now that we know 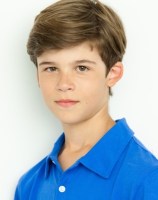 Rex Linn will play Riggs’ father in Lethal Weapon Season 2, who will play teenage Riggs in flashback? —Camille
That plum role has gone to the well-coiffed Chase Mangum, pictured at right.

I hope you can give out some Lethal Weapon tidbits. —DianaD
Oh, I have plenty more. Previewing Blindspot baddie Michelle Hurd’s arrival as Chief Gina Santos, showrunner Matt Miller said that with Murtaugh having chased Riggs to Mexico, “Captain Avery has sort of lost control of these guys, so we need someone to play the heavy, to come in to crack the whip.” Thing is, Murtaugh is “immediately freaked out” to see Santos, due to a “finger linger” they shared during a years-ago stakeout. But when he brings up the muddled memory, “he only sinks himself deeper into the hole with her.” Bonus scoop: Episode 2 of the new season features the show’s first boat chase, during which “Murtaugh gets to harpoon a guy.”

Any Criminal Minds scoop, particularly on Spencer Reid and his PTSD? — Diane
With his wrongful incarceration, Reid “just went through a major crisis, and we don’t want to pretend that never happened,” says showrunner Erica Messer. “At the same time, we don’t want to dwell in that experience. But you will see shades of how he changed, I would argue, for the better. A little of the innocence is gone, and yet he’s still the lovable, brilliant Dr. Reid. We’ll get the best of all worlds there.”

Will we see Greg again on Crazy Ex-Girlfriend? —Erin
“As Rachel [Bloom] always says, ‘If we told you, that wouldn’t be very fun. And if he were [returning], we wouldn’t tell you,'” co-creator Aline Brosh McKenna said at TCA. Greg, she noted, was one of the few characters “that figured out his stuff, and moved on” — but his someday return is “not at all off the table,” McKenna noted. 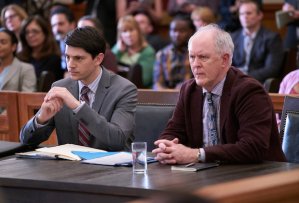 what the new case on Trial & Error will center around and who will replace John Lithgow? —Nicole
Season 2 of the midseason NBC comedy will revolve around a yet-to-be-cast older woman serial killer named Lavinia Peck-Foster, as well as another cold case. Neither John Lithgow nor Krysta Rodriguez will be back as series regulars, while a Serial-like podcaster will be among those helping Josh’s scrappy legal team.

Do you have any scoop about Supergirl and/or The Flash? —Sarah
I choose Column A, since I have just learned that the CW series is seeking a fortysomething actress to play a mysterious and “sexually compelling” Kryptonian who is being likened to Game of Thrones‘ Melisandre. 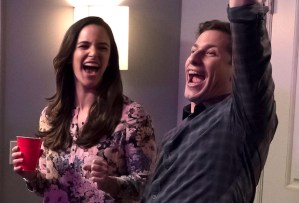 you have something on Jake and Amy on this season of Brooklyn Nine-Nine? —Shelby
What’s a summer TCA party with a Melissa Fumero check-in? With Jake and Rosa framed for robbery and jailed for several episodes, “The squad is desperately trying to figure out a way to get them out. All things are being considered,” Amy’s portrayer told me. “Remember how Charles’ hair went white? That is still an ongoing thing he’s dealing with while trying to not crumble from the stress.” Amy herself “is just in work mode, trying to work the case,” but charged a point where “she mayyybe lashes out in a library, on unsuspecting passersby,” Fumero hints. “She’s just trying to keep it together.” Might there be “conjugal” visit in the cards for Amy and Jake? “Kind of…? Sort of…?” the actress answered. “That’s all I can say!”