The sci-fi series — premiering Sunday, Sept. 10 at 8/7c — is not just a Family-Guy-in-space collection of punchlines; it has a dramatic side as well, with earnest metaphorical explorations of current societal issues. (An early episode tackles the thorny question of gender identity, for example.) And that’s exactly the way MacFarlane, who created the show and stars as the Orville’s captain Ed Mercer, wanted it. 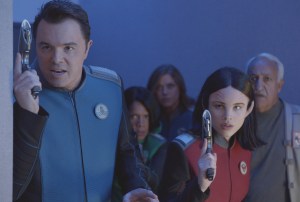 “We really do see it as a sci-fi comedic drama,” MacFarlane told reporters at the Television Critics Association press tour on Tuesday. “It can’t just be gag-gag-gag-gag-gag. There has to be some reality to where the jokes come from.” He adds that The Orville never ventures into straight satire, a la Spaceballs: “Nothing ever goes into that Mel Brooks realm, and that’s by design.”

That may come to a surprise to anyone who’s seen the ads for The Orville, which “have leaned very heavily on the comedy,” MacFarlane admits. “Comedy is a very big part of this… [but] it is one piece of a larger geometric shape. The show is seeking to break a little bit of new ground, tonally.”

The Orville isn’t serialized, so it’s free to hop around from lighter stories to heavier ones from one week to next, MacFarlane says: “Each week, you’re seeing a little movie, and each story is different. And tonally, there will be some variance. But the characters are always the characters.” He cites Star Trek: The Next Generation as a touchstone, which had “a big two-part episode about the Borg that was followed up the next week with a story about Picard going home to France to visit his brother at the winery… And I remember thinking, ‘God, this is how TV should be. You should be able to write any kind of story each week, and really surprise your audience.'”

MacFarlane ultimately sees The Orville as an antidote to the current wave of dystopian sci-fi shows like The Walking Dead. “I kind of miss the forward-thinking, aspirational space that Star Trek used to occupy. It can’t all be The Hunger Games. It can’t all be the nightmare scenario,” he says. “I’m tired of everything being grim and dystopian. I miss the hopeful side of science fiction.”