Lovers of love rejoiced on Monday as Rachel Lindsay, ABC’s 13th Bachelorette, handed out her final rose in an intimate, tasteful, understated setting.

Just kidding! It was a live, three-hour, overblown spectacle complete with a raucous studio audience — and we wouldn’t have had it any other way.

The initial ax fell towards the end of the first hour, following a series of overnight dates with Rachel and her three remaining suitors. After handing roses to Bryan and Peter (Peter?!), Rachel announced that Eric was no longer in the running to become America’s Next Top… wait, sorry, wrong show. 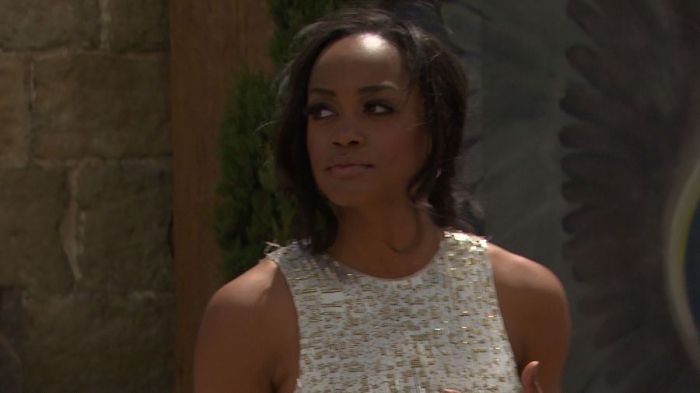 Anyway, Rachel took Eric for a lovely post-dump stroll through the gardens, where she put on her best customer service voice to explain why their future just isn’t going to happen. “It’s hard to say goodbye when I have such strong feelings for you,” she said. “It’s just that… I have stronger feelings for the other two guys that are here.” She could (and probably should) have ended it there, but decided to twist the knife instead, adding, “It’s important that you understand I do love you. I’m just not in love.” (So… literally everything you don’t want to hear from the woman you’re looking to marry.)

But don’t you worry about ol’ Eric. He made an appearance during the live portion of the finale, and not only did he look great, but he took a dramatic moment to thank Rachel for making him a man. (Real talk: “Manhood” isn’t a shabby consolation prize for this show, especially considering how few suitors even get to leave with their dignity.)

Jonesing for another thrill after kicking Eric to the curb, Rachel decided to take her life into her own damn hands with a hot air balloon ride over the Spanish countryside with Bryan. The perilous date segued into a sexy vocabulary lesson, which — you guessed it! — ended in tears. Come on, this is the three-hour Bachelorette finale; I’d be surprised if one of the suitors managed to take a bathroom break without it ending in tears.

Then came Rachel’s follow-up date with Peter, a nice casual afternoon at an actual church, complete with a lecture about marriage from an actual priest. (And the award for Least Subtle Date Theme goes to…) Unfortunately, Rachel’s dramatic outing did little to quell her fears about committing to Peter, leaving the audience to assume that Bryan — he of the “secure” and “confident” variety — had this competition in the bag.

That said, there’s a certain chemistry between Rachel and Peter that you can’t deny. Like, this man is obviously not ready to give her what she wants — but she’s still fighting for him with such passion. He challenges her in a way that Bryan doesn’t, and I think she finds that exciting. (For someone who hates to dwell in “the unknown,” she sure does choose to spend a lot of time there.)

During the live portion of the show, Rachel told host Chris Harrison that her dramatic ending with Peter — which included a kiss, but no official “goodbye” — was “frustrating” for an assortment of reasons, including that she literally “cried [her] eyelashes off.”

Peter returned in the present to get real with Rachel about his emotional shortcomings, though he denied that there’s anything “wrong” with him or with his feelings for her. (He does, however, regret telling her that a life without him would be a life of “mediocrity.”) Then he said he felt “attacked” by her attempts to pressure him into a commitment, though he couldn’t expand on those feelings — which was objectively weird.

“I wish you nothing but the best,” Peter told Rachel before sauntering back into the shadows, paving the way for the moment we’d all been waiting (almost three hours!) for: Bryan’s proposal. Which she accepted!

“My heart has never been more confused than it has been this week,” she told him. “I’ve always been drawn to the excitement of gambling my feelings on the complicated relationships. … That’s why when I met you, it just seemed to perfect. I was trying to find cracks in what seemed like the perfect foundation. I’ve really had to do some soul searching, deeper than I ever have before, to find the courage to challenge myself. But this love has been so mature, it’s tested me in ways I couldn’t have even imagined. … Right here, in this moment, standing with you, I see my forever.”

Your thoughts on the way things ended with Rachel and her suitors? Do you see Bachelor potential in either of her rejects? Vote for the guy you wanted Rachel to pick below, then drop a comment with your take on the finale.