Monday’s episode of So You Think You Can Dance at last revealed the Top 10 contestants for Season 14, after weeks of stunning auditions, brutal training at The Academy and far too much footage of the All-Stars looking conflicted about who to cut.

Over the course of two hours, we finally learned who each All-Star decided to bring to the performance shows — and the resulting duos set a very high bar in their first live outing.

Below, let’s recap Monday’s routines, in the order each finalist was revealed:

* Fik-Shun Stegall and… Dassy Lee! (Hip-Hop) — The light, fizzy tone and synchronized robotics in this routine reminded me quite a bit of Fik-Shun’s “I Can Make Ya” piece with Kida last season — and that’s a great thing. But Dassy and Fik-Shun fell just a hair out of sync throughout the performance, particularly during the chair sequence, and I had expected more start-to-finish precision from the duo. Having said that, they seem to genuinely enjoy working with one another, and Fik-Shun already proved with last year’s kid-centric season that he’s capable of great mentorship.

* Allison Holker and… Logan Hernandez! (Contemporary) — With Allison sidelined for a recent shoulder injury, Logan was paired up with previous Dance contestant Audrey Case, but the shake-up didn’t seem to rattle him much. Instead, Logan brought a wonderful fearlessness to the routine, proving himself a sturdy partner for Audrey (and, hopefully, Allison). I do wish that Logan’s passion had worked its way up to his face; as strong and dynamic as his movements were, his expression for most of the number was strangely blank. But Logan still showcased an adaptability that could take him far in the competition — and here’s hoping he’ll get there with his All-Star by his side in the weeks to come.

* Jenna Johnson and… Kiki Nyemchek! (Cha-Cha) — It took me a few seconds to move past my disappointment that Jenna didn’t pick Kevin “Konkrete” Davis Jr., even though bringing him to the Top 10 would have put a huge choreographing hurdle in her way every week. Kiki, a ballroom pro, was of course the natural choice for Jenna, and he was every bit as solid and crisp a partner as she needed for this quick cha-cha. My fingers are crossed that Kiki will show a bit more vulnerability moving forward, which is something he didn’t quite showcase at The Academy — but on a nerve-wracking evening of live performances, Kiki was a self-assured and reliable dancer throughout.

* Cyrus Spencer and… Kaylee Millis! (Contemporary/Hip-Hop Fusion) — After revealing some chinks in her armor at The Academy, where she didn’t quite rise to the challenge of dueting with Cyrus on an animation routine, Kaylee had a lot to prove in her first live performance — and it makes me so sad that she didn’t exactly meet expectations. Some of the blame falls on the costuming for Monday’s performance; as strong and emotionally engaged as Kaylee’s movements were, that off-the-shoulder gown didn’t do her any favors, and she couldn’t afford to look uncomfortable on such an important night. But when all was said and done, it was Kaylee and Cyrus’ periodically awkward movements, and their somewhat forced emotional connection, that left more to be desired. 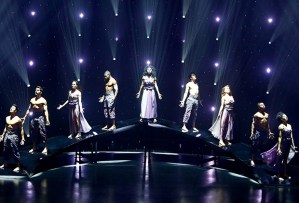 * Comfort Fedoke and… Mark Villaver! (Hip-Hop) — Comfort was hardly given any screen time at The Academy, so she and Mark could easily fly under voters’ radar this season. But in their two minutes on stage Monday night, the pair forged an easy, joyous chemistry, and Mark punctuated every movement with effortless swagger — so much so, in fact, that his and Comfort’s routine seemed more like an improvised duet on a nightclub dance floor than a rigidly choreographed piece. We’ve already seen — in his audition, for starters — that Mark can hit the quiet, intimate moments of a performance, and it was a delight to see that he’s just as comfortable with loose, fun steps.

* Marko Germar and… Koine Iwasaki! (Contemporary) — Stacey Tookey + two beautiful dancers + really, really good lighting + a flower crown = a home run for So You Think You Can Dance — with a caveat or two. Frankly, I didn’t think Marko and Koine’s performance was quite worthy of a standing ovation; despite their gorgeous lines and steady partner work, the dancers lacked that deep, raw, captivating emotional connection that transcends all the pretty lifts. The dancing itself was beautiful to watch, but I didn’t sense that Marko or Koine really understood what was at stake for their respective characters.

* Paul Kamiryan and… Sydney Tormey! (Ballroom) — As a longtime Dancing With the Stars fan (and recapper), I was thrilled to see Val Chmerkovskiy join the SYTYCD fold as a choreographer, and his Latin ballroom routine allowed Sydney to officially arrive, after weeks of flying under the radar. But Paul and Sydney were unfortunately sandwiched between two lovely contemporary performances — and although they turned in a wholly solid routine in their own right, I’m not sure it was memorable enough to ensure they’ll stay in the competition much longer.

* Robert Roldan and… Taylor Sieve! (Contemporary) — The opening tumble that Taylor took, from atop Robert’s shoulders to the floor. Her slow, controlled descent from a handstand back into an upright position. That bird’s-eye view of Robert spinning Taylor as smoothly as if they were ice skaters. Every second of this Travis Wall creation forced Robert and Taylor to do insanely challenging partner work — and not only did they master the moves, but they brought an emotional gravitas to each step that made the piece feel like so much more than cool gymnastics. I’m not a fan of how SYTYCD has, at times, turned into The Robert Roldan Show, but he and Taylor were simply in another league on Monday night, making them more than deserving of the praise that followed their number.

* Jasmine Harper and… Robert Green! (Hip-Hop) — Much like Comfort, Jasmine and her Academy teammates were barely seen during the last few Dance episodes, which made it harder to appreciate her episode-ending duet with Robert on Monday. Still, Jasmine and her partner were given an unenviable task — follow Robert and Taylor’s contemporary! — and rose to the challenge with a fun, fast and just-silly-enough performance that ended the evening on a high note. (Seriously, though, SYTYCD producers: Jasmine deserved better than that edit she got at The Academy.)

OK, your turn! Which of Monday’s performances impressed you the most — or the least? Did any of your favorites fail to make the Top 10? Hit the comments!