As one might guess, Steve Burton‘s return to ABC’s General Hospital “is going to shake everything up,” executive producer Frank Valentini promises — especially since Billy Miller is currently filling the role of Jason Morgan, for which Burton won his first Emmy back in 1998.

Following an Emmy-winning run on rival sudser The Young and the Restless, Miller joined GH in 2014 as, we were told, Jason, whose appearance was altered by post-car crash facial surgeries.

Valentini of course won’t confirm whom Burton is playing, but says that the arrival of someone who at the very least looks like the old Jason is sure to cause double takes.

“Jason’s life affects, like, 30 people on the show. There is almost nobody who won’t be affected by his return,” the EP told TVLine at ABC’s summer TCA party. “That whole paradigm — ‘Who’s the real Jason? How will people react to him?’ — I find to be very interesting, and it will be fun for the audience.”

Speaking of the soap’s passionate viewers, Valentini says that despite having myriad theories about what exactly is going on hurled and tweeted his way, “No one has guessed right. They think we’re making it up as we go along, when it’s all been laid out.”

Burton’s return trip to Port Charles began about four months ago, says Valentini. “When we knew that he was available and interested, we started to brainstorm ideas about what we wanted to do.” Eventually latching onto one particular story idea, “We thought, ‘That’s interesting, that’ll work, and that will fit in with what we’ve got going,’ so we just ran with it.

“We’re really excited to work with Steve, because he’s a really important part of the show.” 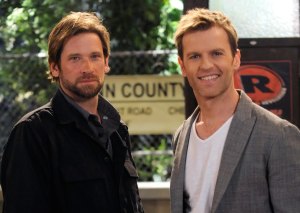 As fans of ABC’s defunct One Life to Live know, Valentini has been down a similar road before, having brought fan favorite Roger Howarth back to the canvas after Todd Manning had been recast/his face “changed” with Trevor St. John. Any lessons learned? “Yes, absolutely,” he says. “The thing about being an EP for as long as I have is you learn what not to do, and I try never to make mistakes twice. Not that I haven’t made them twice, but I try to learn from my mistakes.”

Burton himself has said that he will be back on GH for “a while” — while Valentini says that the effects of the encore will be felt “for probably about nine months, before we settle into the next big thing.”