Autism is a tricky subject to depict correctly, but ABC’s new fall medical drama The Good Doctor isn’t shy about tackling it head-on.

Based on a South Korean drama, Doctor stars Bates Motel alum Freddie Highmore as Dr. Shaun Murphy, a young surgeon and autistic savant who joins the staff of a prestigious hospital. But the hospital’s board members worry that Shaun’s lack of communication skills could make him a liability in the operating room. 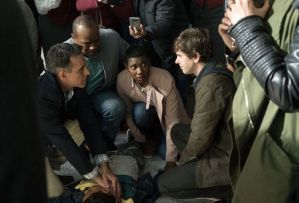 “There’s going to be people who think he doesn’t belong there for a while. He’s going to have to prove himself,” creator David Shore (House) explained at the Television Critics Association press tour on Sunday. But Shaun’s unique perspective quickly helps him win over his colleagues: “He’s a catalyst for change among the other doctors. His different way of looking at the world will, I think, inspire them.”

Shore and the writers did a great deal of research on autism before shooting, he says: “We saw a lot of documentaries. We consulted with people. We have people on the spectrum who we’re working with.” But he cautions that Shaun is “a very specific character. He’s not there to represent autism.” Highmore adds that “it would be impossible… and a somewhat rude thing to say that this character will represent [all autistic people]. Hopefully, he will speak to everyone with differences… he’s not solely defined by his autism.”

Autism can affect a person’s motor skills as well, which could make being a surgeon difficult for Shaun, but Shore says that “his fine motor skills will prove to be quite capable. The real challenge will be his communication skills… He can be right, and fail in communicating the information, which is crucial. There will be consequences for him not following protocol.”

So does Shaun have anything in common with another Shore creation: cranky, antisocial physician Dr. Gregory House? “The characters ultimately couldn’t be more different,” Shore insists. “Yet they’re, in a way, asking many of the same questions. They’re asking why we do the things we do.”