I’ll say this much about sometimes-monotonous Sharknado 5: Global Swarming: it was a slight improvement on last year’s completely monotonous The 4th Awakens.

Surveying the franchise-to-date, as TVLine’s resident, I’m Getting Too Old for This Fish expert: Part 2 (The Second One) still reigns, having served up fun riffs on Airplane! and the like. Part 3 (Oh Hell No!) was inundated with un-clever NBC Universal shilling, you will (?) remember, while Part 4 seemed content to introduce a new, high-larious kind of “-nado” every five minutes… and leave it at that.

Picking up not too long after the events of The 4th Awakens, Global Swarming quickly established that Nova has assembled the Sharknado Sisters, a secret society of fighters. Enlisting Fin’s help, they go all Raiders of the Lost Ark to procure an ancient artifact that can vanquish sharknados. Or create them. Maybe both! I wasn’t clear on that.

Whereas every Sharknado motion picture before it had the heroes/humanity being dogged by toothy twisters, Global Swarming was more about Fin, April and Nova chasing after the funnel that sucked up their son Gil, only to get “warped” from country to country every time they came close. 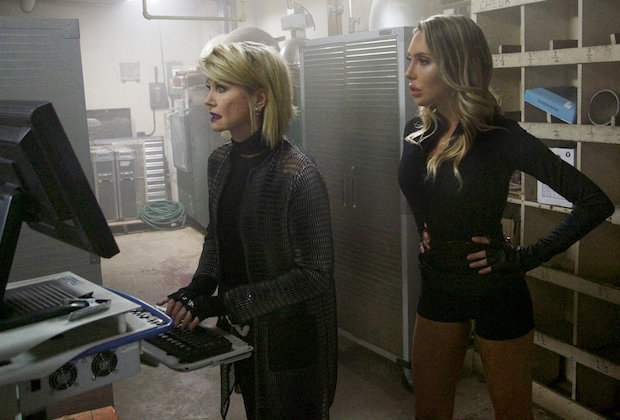 The annual assault of cameos this time included — but by no means were limited to! — Chris Kattan (as a James Bond-ian prime minister of England), Charo (as the thankfully dialogue-free queen), Nichelle Nichols (as the head of NATO), Geraldo Rivera (playing a zeppelin pilot with an empty vault, har), Olivia Newton-John (as a scientist who manages to name-check several of the singer’s songs) and Bret Michaels (who showed up only to die, but not).

TVLine readers last summer gave The 4th Awakens an average grade of “C+”; review some of the five-quel’s “best bites” and then vote on Global Swarming below.

“You’ve met some of my Sharknado Sisters.”
“Please tell me you’ve started a band, not a cult.”

“Please do not confront, aggravate, fight, pet or feed the sharks.”

“London Bridge is falling down!”

“We are a proud federation….”/”You have gone where no man has gone before.”

“I’m a lot of things, but I’m not a human helicopter.”

“Mom has the magic touch.”/”Just don’t get too physical, OK?”