The Rumple will not have fallen too far from the tree when Once Upon a Time‘s Season 7 “reset” arrives on Oct. 6 (now airing Fridays at 8/7c).

After holding court at the Television Critics Association summer press tour on Sunday, Once co-creator Adam Horowitz told TVLine that just as the Evil Queen and Captain Hook (played by Lana Parrilla and Colin O’Donoghue) have been cursed with new personas in the Seattle neighborhood of Hyperion Heights, Robert Carlyle‘s Rumpelstiltskin will be a bit (though not entirely) different, too.

“He looks menacing, doesn’t he?” the EP said of the Comic-Con trailer‘s glimpse of Carlyle, seen above. “There’s always that element of menace and mystery, and [Carlyle’s character] is involved in many of the goings-on in this neighborhood in Seattle. It’s a lot of fun and it’s another layer and color for Bobby to play.” 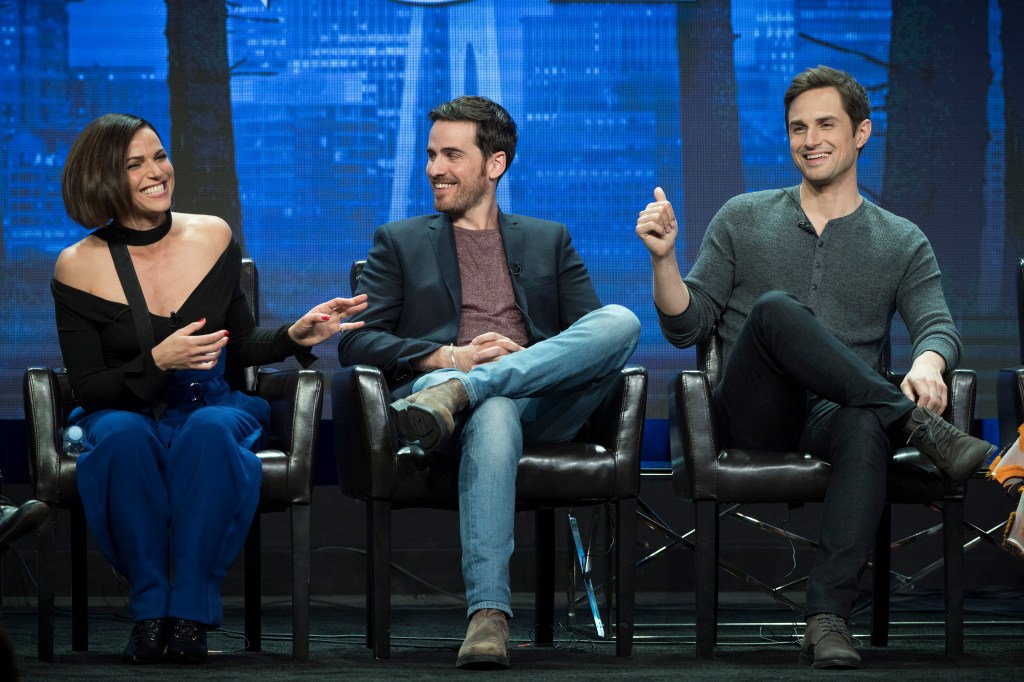 During the actual panel Q&A, Parrilla shared that the Evil Queen’s Seattle persona isn’t even named Regina (which she said is “cool”) and that she is a bar owner who instead of pantsuits wears “denim and rock t-shirts.” Added the series vet, “It’s fun to be a part of something that’s constantly evolving.”

O’Donoghue meanwhile said that the pirate now known as uniformed Seattle policeman “Rogers” feels “a sense of loss, and he doesn’t know what it is, what’s missing” — other than, that is, the left hand the lawman is managing without. “He does not have his hand,” Horowitz confirms. “We do get into [why that is].”

Episode 2 of the new season will shed light on what became of Emma, to be played one more time in that episode by Jennifer Morrison, while Episode 4 (in which Emilie de Ravin guest-stars) will do same for Belle. “We know the characters inside and out, but [it’s like] we’re playing them for the first time,” said O’Donoghue, who hailed Season 7’s first four scripts as among the best he has seen.

Parrilla also revealed that Regina and Henry (now played by new series regular Andrew J. West) “reunite after many years in a flashback [and] she’s taken aback” to see his grown self for the first time. “He is no longer this little boy. How does she deal with him as a man?” When they cross paths in Hyperion Heights, however, mom and son will be strangers. “It’s cool and exciting [to play] an entirely different relationship,” said West.