As previously reported, the iconic series — the current season of which already aired in its entirety in the United Kingdom — will look quite different from here on out: Only judge Paul Hollywood will travel with the show when it makes its move from the BBC to the UK’s Channel 4 next season. Judge Mary Berry and hosts Mel Giedroyc and Sue Perkins will not continue with the series; QI host Sandi Toksvig and comedian Noel Fielding have been brought in to host, while chef Prue Leith will take over the judging duties for Berry.

But enough of the sad news, let’s get to the good stuff. Namely, which of three bakers took home the cake stand? Was it methodical engineer Andrew, consistent garden designer Jane or extravagant phys ed teacher Candice? Read on to find out.

SIGNATURE CHALLENGE | The first challenge of the evening was to create a three-tiered meringue crown. Candice was off to a great start, with her mango and strawberry crown earning a coveted handshake from Hollywood himself and impressed eyebrow raises from everyone else in the room. Jane also aced the signature with her strawberry, raspberry, blueberry and nectarine crown, earning herself a two-handed (!) handshake. Sadly, Andrew failed to secure Paul’s approval on his caramel pecan crown.

TECHNICAL CHALLENGE | The technical challenge should have been easy enough: a Victoria sandwich (two pieces of cake with jam and buttercream filling the middle) is a fairly simple dessert after everything they’ve baked over the course of the season. However, the judges had one last twist up their sleeves: Contestants were to bake without a recipe. Jane and Candice, high off their solid first challenge, failed to wow this time around, allowing Andrew to break out from behind and land in first place.

SHOWSTOPPER CHALLENGE | With all the contestants on an even playing field, the pressure was on for the final challenge of the evening: a “Picnic fit for the Queen” (aka the biggest challenge in the history of the series). The finalists had to bake: one chocolate celebration cake, 12 sausage rolls, 12 mini quiches, 12 savory scones and 12 fruit and custard tarts — that’s 49 items (!) — in the allotted five hours.

FINAL FEEDBACK | Jane’s “Family Favourite Feast” looked “right and regal” to Mary Berry, however her sausage pastry wasn’t fully cooked and her scones were touted as too bland. Candice’s “Picnic for Pearly Kings and Queens” fared better, garnering praise for her creative design of the [fully cooked] pig-in-a-blanket sausage rolls. Andrew’s “Family and Friends’ Favourite Picnic” was beautifully displayed, but, like Jane, his sausage pastry was not fully cooked and the glaze used on his strawberry tarts made them too soggy. After the judges gave their feedback, Andrew sagely whispered to Jane, “It’s you two.”

A WINNER IS CROWNED | And how right he was. After joining their family, friends, and former contestants for a picnic, the judges crowned Candice the winner, earning cheers from the crowd and her fellow finalists. 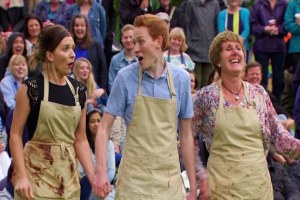 A stunned Candice reminisced about applying to be on the show: “[I] never, ever, ever thought I’d ever even get on this, and I’m standing here, now, with this. And they said my name, and that means more to me than I think anyone will ever, ever realize.”

Clutching her flowers and trophy, Candice proclaimed, “I did it. I’m good enough.”

Now it’s your turn. What did you think of the final BBC episode? Did your favorite win? Grade the episode via the poll below, then leave a comment with all of you thoughts!