Buffy the Vampire Slayer successfully battled a snake-like monster during the Mayor’s Season 3 finale ascension, but another serpent almost got the better of leading lady Sarah Michelle Gellar and co-star Clare Kramer.

During the Season 5 episode “Shadow,” Buffy and her nemesis Glory (Kramer) faced off inside a cobra exhibit at the Sunnydale Zoo, and the set was populated with real, slippery snakes for the shoot.

“They were like, ‘Yeah, yeah, the snakes are fine,'” recalls Kramer, who recently wrapped directing her first documentary, Joyrider. “And then all of a sudden, [executive producer] Joss [Whedon] is like, ‘Um, Sarah, Clare, you guys might want to get up on the chair. We have lost the 9-foot boa constrictor.’ And we’re like, ‘Are you kidding?'” 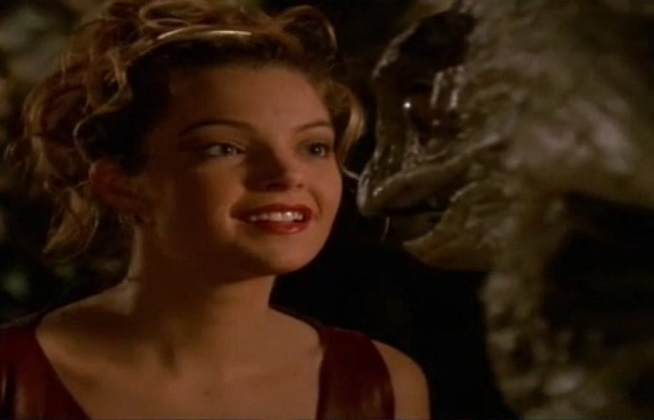 Turns out, the creature (not pictured right) had slithered “its way up into the wall,” Kramer shares. “They ended up having to deconstruct the set while we sat on our directors’ chairs, with our legs tucked under our tushies, waiting for the snake to be recaptured.”

“During this process, they were like, ‘Don’t worry, it ate a couple days ago,'” Kramer continues. “I was like, ‘Ate a couple days ago?! What are you talking about?! I can see that snake, just waiting to constrict me!'” (The snake was eventually found. Phew!)

Despite the snake snafu, Kramer has nothing but fond memories of her time as the god Glorificus and her snappy one-liners. “The dialogue was so amazing in that series, and I could just play and sort of riff and have fun with the dialogue,” the actress says. “It just was a very freeing experience.”