The more Dynasty changes, the more it stays the same.

The CW’s reboot of the ’80s primetime soap keeps the glitz and glamour of the original, touting the ridiculously wealthy Carrington family as the “1 percent of the 1 percent” and promising a hair-pulling, bitch-slapping catfight in the very first episode. And right now might actually be the perfect time for a Dynasty revival.

“We are definitely living in the age of dynasties… whether we’re talking about Trumps or Clintons or Kardashians or Murdochs,” executive producer Josh Schwartz (Gossip Girl, The O.C.) told reporters at the Television Critics Association press tour on Wednesday. But the new Dynasty — premiering Wednesday, Oct. 11 at 9/8c — does offer some updates to the original formula.

This time around, Blake Carrington’s much younger fiancée is named Cristal (not Krystle), reflecting her Venezuelan heritage. She’s played by Vampire Diaries alum Nathalie Kelley, who says that her character “represents a more current version of what’s happening in America.” She’s also not just a secretary this time, but a powerful marketing executive in Blake’s corporate empire — and she has a dark past, too. “Part of the fun was taking a character like Krystle and dirtying her up a little bit,” Schwartz teased. 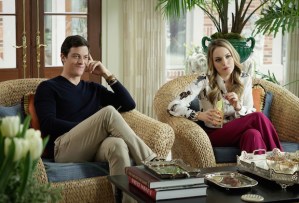 The action has been moved from Denver to Atlanta, a city Schwartz thinks is a “more believable” location to place Blake’s business. And Blake’s son Steven (James Mackay) is gay, as he was in the original series, but here, he’s “confidently gay. He’s not toying with his sexuality… and Blake accepts him,” Schwartz says. That’s a huge change from the original, where Blake was violently opposed to Steven’s homosexuality. Plus, Steven’s main love interest, Sammi Jo — originally played by Heather Locklear — is a man this time around (now “Sammy Jo”), played by Empire‘s Rafael de La Fuente.

We don’t see the iconic Alexis Carrington, played by Joan Collins in the original, in the reboot’s pilot, but she’s definitely mentioned… and fans can expect to see her soon enough. “We’re taking our delicious time… it will happen sometime this season,” EP Sallie Patrick promises. (The new Alexis hasn’t been cast yet, though.) 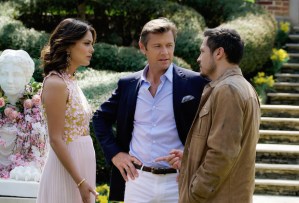 And speaking of big shoes to fill: Melrose Place vet Grant Show stars as patriarch Blake Carrington, playing the role originated by John Forsythe. Show says he jumped at the chance to play “one of the most complicated villains ever, maybe, in soap-opera history… This Blake will be very dark, but at the same time, he fiercely loves his family… He truly believes that what he’s doing is best for his family.”

The original Dynasty was produced by the legendary Aaron Spelling, who also produced Show’s Melrose Place. So what does Show think Spelling would think of this new Dynasty? “I think he would love it… his stories were always about characters, and about people, and that’s what this is about.”