Hmmm, what’s that saying about “a woman scorned”?

After (singing and) dancing around its title for the first two seasons, The CW’s Crazy Ex-Girlfriend is fully embracing it in Season 3 (debuting Friday, Oct. 13 at 9/8c) — and looking to an iconic spurned ex for inspiration. 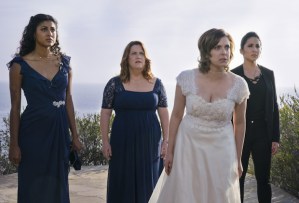 “If you thought this show was going to be ‘Funny Fatal Attraction,’ that’s what we’re going into this season,” star Rachel Bloom (Rebecca) promised at the Television Critics Association press tour on Wednesday. And with good reason: Season 2 ended with Rebecca being left at the altar by the love of her life, Josh Chan (Vincent Rodriguez III), and subsequently vowing revenge. (She’s not going to be ignored, Josh!)

But she’s not exactly Glenn Close, either. “If Rebecca tried to boil a bunny, she would take the bunny and be like, ‘Oh, it’s so cute!’ And then a month later, she’d have, like, fifty bunnies,” co-creator Aline Brosh McKenna joked. “She’s not very good at being the femme fatale she would like to be.”

* The season will kick off with a “Disney-style” opening number that features nearly the entire cast.

* Get ready for “the sexiest musical number we’ve ever done,” Bloom promised, adding that the choreography involves her “flinging her boobs around.”

* We’ll find out more about Rebecca’s BFF Paula (Donna Lynne Champlin) and her background. “We see her parents, and go back to Buffalo,” Champlin teased. “You get more information as to who Paula is.”

* Josh has his own personal crisis after he impulsively joined the priesthood in last season’s finale, Rodriguez says: “Josh is gonna hit a crossroads. How long does he really stick with anything?… What’s weird is that Rebecca is going to help facilitate that.” (Before destroying his life, we assume.)

What do you want to see in Season 3? Hit the comments, Crazy Ex fans.