On the Season 3 finale of Casual, one Cole child officially leaves the nest, while another makes a surprise entrance.

The series’ central family grows — both in emotional maturity and, potentially, in size — in the slow-burning conclusion of the Hulu comedy’s stellar third season, which finds Alex and Val (finally!) back together under one roof. As we cross fingers for a Season 4 renewal, read on for a recap of “The Hermit & The Moon.” 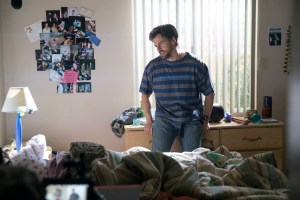 FATHER ALEX | Alex starts the episode still blissfully unaware that Judy just dumped him. Unfortunately, his ignorance is short lived as Rae talks some sense into him over french toast. (The waffle iron, much to Alex’s disappointment, is still incredibly broken.) After finally realizing his fate, Alex begins an all-too-familiar — well, familiar to everyone but him — post-breakup spiral. He confronts Judy, quits his job and obsesses over fixing the waffle iron only to finally end up back on Jennifer’s couch.

Jennifer, as always, is none-too-pleased to see him but delivers her trademark brand of harsh-yet-comforting advice. A few minutes into the session Alex confesses that when they first met, he thought they’d end up in bed together (a point I happen to agree with). As Jennifer responds, “When I first met you, I thought you were a tremendous narcissist who lucked into a life of unspeakable privilege,” she reaffirms for the hundredth time that she is both way too cool and far too emotionally stable a person to be a part of this show.

Next, Alex asks Leon to go on a camping trip with him. But before Leon can even respond (presumably with a yes he’ll immediately regret), Rae drops the episode’s huge twist: She’s pregnant!

Considering his emotional state, Alex handles the news of his potential fatherhood incredibly well. He says he’ll support whatever Rae wants to do with the baby, a choice that she doesn’t make by end of the episode. What becomes definitively clear is that Rae and Alex have some serious chemistry, though neither of them seem anywhere near ready to admit it. (Related: Whatever happens with the pregnancy, this episode, like the rest of Season 3, makes me want to see a lot more of Rae and Alex together.)

MAKING THE SAME MISTAKES | Meanwhile, Val is searching for Laura, who has gone MIA since last week’s events in Sacramento. Val should definitely stick to psychology, because she’d be a pretty lousy detective: She has no luck on her own, then calls in Drew, who has the brilliant idea to check the teenage girl’s social media for clues. It’s there that Val discovers Laura is in Burbank with her grandma.

Val goes to rescue Laura from Dawn, but things definitely don’t go as planned. Laura states she wants to stay with Dawn permanently, admitting that people her age don’t like her; the ones that do, she tends to drive off. Using Val’s own words from earlier this season against her, Laura confesses that she has “a bit of a pattern.”

Val tries to change her mind, but it’s too late. Then Val realizes that she’s been too consumed in her own problems to worry about Laura’s, a habit that she has always despised in her own mother. This leads to a really honest and heartfelt talk between Dawn and Val, where she admits to herself that she hasn’t been the mom she wanted to be, saying, “You try so hard and you still make the same mistakes over and over and over again.”

It’s this admission that allows her to be okay with Laura staying at Dawn’s, but not before apologizing to Laura, who looks out of the window emotionally as her mom drives away.

A NEW NORMAL | But Val doesn’t go home; she heads to Alex’s. She asks a question I’ve been wondering all season when she wonders aloud why she ever moved out of Alex’s house in the first place. Finally she tells Alex, “You’re my best friend, and I don’t know why I tried so hard to deny that,” wrapping up a huge narrative throughline of the season. But things can’t completely go back to normal, which is made clear in episode’s final shot. Alex and Rae are together, and Val is separated from them. Eerily similar to the visual of Alex in the hospital with Drew and Val in the previous episode, no? (—Written by Jasper Pike)

What did you think of the season finale? Grade the episode via the poll below, then hit the comments to elaborate on your thoughts!