The Sinner is an interesting experiment in form: Can you still have a whodunit when you already know who done it? USA Network’s new eight-episode crime thriller starring Jessica Biel — debuting this Wednesday at 10/9c — is in the bleak, methodical vein of Top of the Lake and Broadchurch, with plenty of plot twists and moody atmosphere, but with zero mystery about the identity of the culprit. Rather than a whodunit, it’s more of a “whydunit”… and that might be part of the problem. 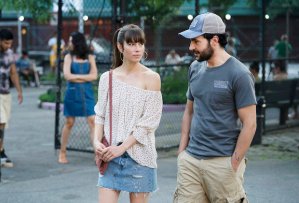 Biel plays Cora, a young mom living in a sleepy town in upstate New York, and the pilot’s opening scenes are mundane, but unmistakably tinged with dread. We know something bad’s about to happen… and indeed, it does. During a beach outing with her husband and son, Cora commits a harrowing, graphic act of violence — one that’s made all the more terrifying by the mystery surrounding it: Why? Cora’s as stunned by what she did as everyone else, but she soon hints at some dark truths lying just beneath the surface. When she’s told how she might be able to get her life back, she snaps, “What makes you think I want my life back?”

After the initial shock of Cora’s vicious outburst, The Sinner sets about answering that “why” question by diving deep into her psyche: a tangle of repressed childhood trauma, violent self-loathing and unexpressed anger, all just waiting to erupt. This is a great acting showcase for Biel, who drops the makeup and disappears into a difficult, haunted character. It’s not a huge leap to call this Biel’s most daring performance — her post-7th Heaven résumé is an uninspiring mix of dumb rom-coms and failed action franchises — but she absolutely rises to the challenge. She makes us feel on a visceral level how hollow, how wrung-out, how at the very end of her rope Cora must feel. 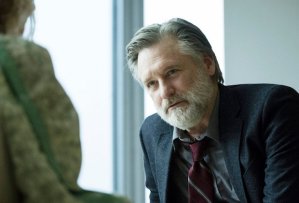 Girls alum Christopher Abbott does solid work, too, as Cora’s husband Mason, who struggles to make sense of his wife’s inexplicable actions. Bill Pullman co-stars as grizzled detective Harry Ambrose, who’s determined to nail down why Cora did this, but he’s saddled with a shaky subplot about Harry’s personal life, including a silly dominatrix angle. (Is it a rule now that every TV drama has to give one of its characters a scandalous sexual kink?) And we never get a satisfying answer as to why Harry involves himself so deeply in Cora’s case. There’s an uncomfortable subtext hovering over all this: Would everyone care so much, and would the authorities be working so hard to explain Cora’s behavior, if she weren’t a pretty white woman?

The Sinner does have a nicely lyrical visual style: It’s shot with a keen eye for detail, with an appropriately gloomy, unsettling musical score. (Again, fans of morose crime dramas like Top of the Lake and Broadchurch will recognize the vibe here.) But strangely, the more we learn about Cora’s complicated past, the less interesting her story becomes. The answers we do get are either too pat — the flashbacks to her childhood, with a young Cora being tormented by her fanatically religious mother, are painfully overwrought — or they’re simply erased by the latest plot twist. Cora’s true motivations get lost in a sea of psychobabble, and it all begins to feel a bit like wallowing in misery, for no good reason.

And the central problem remains: If we already know she did the crime, is it really all that compelling to find out why she did it? We’re robbed of that heady jolt of suspense that’s an essential element of shows like this. (It’s like someone stretched the last five minutes of a crime procedural into eight hour-long episodes.) Maybe with more nuanced character development and fewer clichés, The Sinner could’ve turned the “whydunit” into a viable genre. But based on this mixed result, I’ll stick with not knowing who done it, thanks.