This season on Curb Your Enthusiasm, Larry David will be taking one of his many grievances to court… and he’s inviting another TV star to pass judgment on him.

The long-awaited ninth season of Curb finally arrives this fall after a six-year hiatus, and in a hilarious trailer screened for reporters at HBO’s Television Critics Association summer press tour — it’s not available online yet, sorry — we see Larry struggling with a soap dispenser in the shower, chiding a couple for their public PDA (“You’re allowed to be happy… but not in front of me”) and asking a mourner at a funeral to dial down her sobbing: “It’s way too loud.” Plus, Larry appears on the daytime courtroom show Judge Judy (!), accusing an old lady of trespassing and stealing his ficus plant. 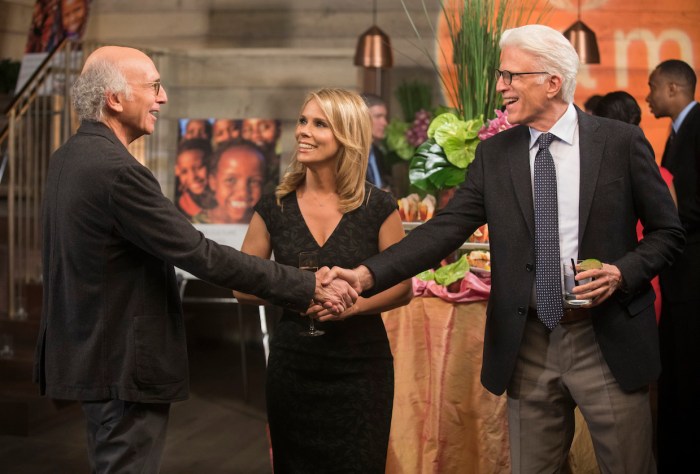 So why bring the show back after such a long break? David’s short explanation: “Why not?” But he added, on a somewhat sentimental note: “I’m not a miss-er. I don’t really miss things [or] people that much. But I was missing this, and I was missing working with these idiots… so I thought, ‘What the hell?'” Plus, “I got tired of people asking me about it.”

David had a room full of TV reporters laughing at his every word, like when he patiently explained why his Curb character plays so much golf: “TV Larry is just about a quarter of an inch away from Real Larry. Real Larry golfs, so TV Larry golfs.” When a reporter asked if he ever notices people avoiding him in real life, he grumbled: “Unfortunately, they don’t avoid me.” And he flatly rejected any comparison between his Curb character and Donald Trump: “I don’t consider myself a prick.”