How much you enjoy Manhunt: Unabomber will depend almost entirely on one thing: how gripping you find watching someone else solve a puzzle.

In the first three hours of Discovery’s new anthology series (premiering Tuesday, Aug. 1, at 9/8c), there are some gruesome reenactments of Ted Kaczynski’s crimes, insurance that we never lose sight of what’s at stake. And the drama manages to wring suspense out of a bunch of G-men standing around a phone and listening, fearful of an explosion, as planes are cleared for takeoff. But mostly, it’s a whole lot of rookie profiler “Fitz” Fitzgerald (Avatar’s Sam Worthington) staring at the serial bomber’s writings like they’re the direst-ever Word Searches in hopes of turning up clues to help shorten the FBI’s long list of potential suspects. 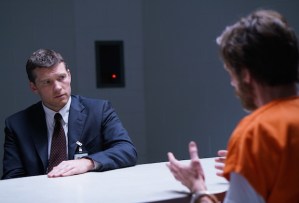 If you stick with the show, a sorta Law & Order: Forensic Linguistics, you’ll find that, OK, at times, it’s a little heavy-handed. Fitz is such a Boy Scout that he makes Captain America look like Boris Badenov. And his family gazes at him so adoringly, you half-expect him to sprout a halo. However, you can’t help but feel for the guy when, day after day, time and again, he racks his beautiful mind to think outside the box, only to have his analyses dismissed by his superiors — among them, The Good Wife alum Chris Noth — in favor of an old Unabomber profile that was years in the botching. “What did they even recruit Fitz for?” you’ll find yourself asking on his behalf. “What is he supposed to do?” And right on cue, a higher-up will answer, “All that’s required of [him] is obedience.” Well, then.

As you’d expect, the most interesting character is the villain of the piece, played by Paul Bettany with the unsettling calm of a snake contemplating whether or not to strike. Scenes in which Fitz attempts to convince an imprisoned Kaczynski to plead guilty call to mind Anthony Hopkins and Jodie Foster’s legendary cat-and-mouse game in Silence of the Lambs. It’s as disturbing as it is creepily fascinating to watch Bettany’s Unabomber toy with the clean-cut agent who naively believes that the perp can be manipulated by the suggestion of a kindred spirit. (On the contrary, Kaczynski is so full of himself that he’s sure “the best that [his captor] will ever be is a feeble imitation of me.”) 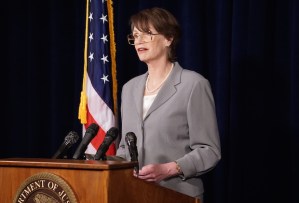 Bettany is so compelling, in fact, that you’ll wish we got more of him sooner. Ditto Jane Lynch, who does fine, subtle work as Attorney General Janet Reno but is, until Episode 4, only heard, not seen. After a while, you also might grow weary of our hero’s Sisyphus routine — he’s forever coming up with a new angle, only to be told by his bosses to rewrite the old one in a report with no typos. But at least you can reassure yourself that the true-crime story has a satisfying ending, since Kaczynski ultimately was sentenced to life in prison without the possibility of parole.

THE TVLINE BOTTOM LINE: While Manhunt isn’t exactly groundbreaking, it nonetheless makes for an occasionally intriguing procedural, one that’s elevated by Bettany’s chilling turn as the Unabomber.