Coming to Riverdale in Season 2: A bad-boy ex, a bisexual Serpent and… possibly Sabrina the Teenage Witch?

The cast and producers of the CW drama dropped a lot of scoop during the show’s San Diego Comic-Con panel on Saturday. Here’s the latest on “Bughead’s” upcoming challenges, the “sexiest” scene ever, an even meaner Cheryl Blossom and much more:

* A new trailer for Season 2 gave fans a glimpse of Archie’s anger and fear following Fred’s diner shooting, with Pop ominously calling the shooter “the Angel of Death” — and a devilish Cheryl taunting her mom Penelope, who’s lying in a hospital bed, her face covered in bandages:

* “We’re going to find out Fred’s ultimate fate at the end of the [Season 2] premiere,” executive producer Roberto Aguirre-Sacasa previewed. “The first episode is Archie, the gang, all of the town, waiting to find out what’s going to happen with Fred.” Whatever the fallout, it will reveal “a completely different side to Archie that we haven’t really seen yet,” KJ Apa shared. Meanwhile, Veronica is “challenged to step up and be a strong girlfriend,” possibly for the first time in her life, Camila Mendes said.

* Newly minted Southside Serpent Jughead “is placed in the middle of two worlds that are starting to collide and erupt,” Cole Sprouse described. “It’s going to start forcing him to pick a side, which is a dangerous place for him to be in because he’s a very morally grey character.” But just because he’s in the gang, “I don’t think it’s going to be as easy as he assumes,” the actor added. “I think he has an idea of fitting in, and he thinks he’s quite a special snowflake and he’ll stand out.” But at Southside High, “standing out can be physically threatening.”

* Sprouse noted that his character is “now very much the outsider” in Season 2 and physically away from much of the cast — but not his girlfriend Betty. However, that relationship will definitely be “tested.” For Betty, having her beau in the Southside Serpents is “very scary,” Lili Reinhart described. “She doesn’t want to lose her man, and also doesn’t want him to get into any danger.” When Sprouse said he wants Betty to “ride or die,” Reinhart hinted that “there might be a pink leather jacket in the future.”

* “We explore that darkness [in Betty] a lot more in Season 2 and coming to terms with it, rather than trying to cover it with a black wig,” Reinhart shared. The cheerleader will even “loosen her ponytail a little more,” Aguirre-Sacasa revealed. As for whom Betty will be leaning on in difficult times — boyfriend Jughead or pal Archie — “she finds a different comfort in every single one of [the characters],” Reinhart replied. “But you definitely see more of Betty and Archie’s friendship and support system.” 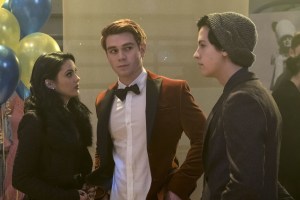 * Another potential threat to “Bughead” (and more ‘ships): Vanessa Morgan (The Shannara Chronicles) will play Toni Topaz, a member of the Serpents who is Jughead’s guide into that world. “She’s like a female Jughead. So she’s trouble,” Aguirre-Sacasa described. And being a bisexual character, Toni “could be trouble for a lot of the people on this show.”

* Mark Consuelos’ arrival as Veronica’s dad Hiram will shake up the Lodge family. His daughter “really wants to know he’s better now,” Mendes shared. “But at the same time, he’s still keeping secrets with [his wife] Hermione,” so Veronica is “still suspicious” and “[doesn’t] trust him.” And what will Papa Lodge think of his daughter’s boyfriend Archie? “We’ve got some crazy stuff together,” Apa previewed, adding that the twosome’s dynamic is “scary” for Archie.

* The Season 2 opener contains “probably the sexiest scene” in the show’s run, and it involves Veronica and Archie, Aguirre-Sacasa teased.

* As if there wasn’t enough boy drama, Mendes revealed that Veronica’s bad-boy ex from New York comes to Riverdale and “brings out Veronica’s dark side.” He “does some really bad things [involving] Veronica and Cheryl [in Episode 5], and because of that, it brings all the girls together to fight it,” Mendes shared. 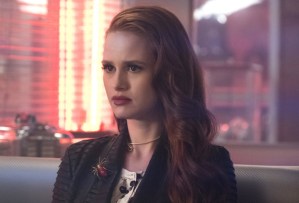 * “Cheryl gets colder and meaner in Season 2 because of all the things that happened in Season 1,” Madelaine Petsch previewed. (Can you blame her?) “But she takes the reins back from her parent,” as seen in that teaser trailer scene. Betty and Cheryl also “have a very interesting dynamic” in the upcoming episodes, she teased.

* According to new series regular Casey Cott, Kevin is still “dealing with that heartbreak. I do think there’s going to be a new love interest that comes in eventually.”

* “Josie might be batting a couple of eyelashes at Reggie,” Ashleigh Murray revealed. As for the Pussycats, “we are, literally, singing the dopest song ever” in Season 2’s second episode, Asha Bromfield (Melody) hinted. “It’s a classic.”

* Asked if any supernatural elements will be introduced into the series, Aguirre-Sacasa cagily responded, “We have been talking about one very prominent supernatural character that exists in the Archie universe, and that’s all we can say.” Sabrina, is that you?

Riverdale returns for Season 2 on Oct. 11, now airing Wednesdays at 8/7c on The CW.