THE PERFORMANCE | Even as some very angry birds swooped in and attacked New York, this week’s Zoo managed to be wildly funny — and that, as always, is due to Burke finding just the right notes as ‎Mitch Morgan, a veterinary pathologist whose skills have very much been put to the test over two-plus seasons of utter insanity.

To briefly recap just the past few weeks: presumed dead after being mauled by “razorback” animal hybrids, Mitch actually spend the decade-long time jump “hibernating in a healing tank,” he deadpanned to Jackson. From there, he was “rescued by fake daughter. Shot real daughter. Found an evil Shepherd device inside my skull,” which was remedied via “brain surgery with a farm animal” (and using a power drill). The actor’s delivery of the exposition dump had us howling.

This CBS thriller is, as we have often noted, nuts. But in that accepted context, Burke represents most any of us with his peanut gallery observations and quippy asides, never letting the outlandish plot points gain any footing (and thus unravel as impossible). In this week’s episode, he also got to play some romantic beats (as Mitch and Jamie finally made up for some truly lost time) as well as some melancholy moments, when Mitch came to realize how much the world of science had changed during his 10-year slumber, thus affixing an asterisk to his heretofore unchallenged genius status.

Zoo is the guiltiest of summertime TV pleasures, but Burke’s all-in commitment to delivering the wacky with a wink always makes it an hour well-spent. 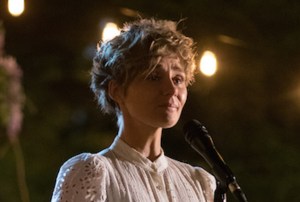 HONORABLE MENTION | Scarlett’s miscarriage in this week’s Nashville offered Clare Bowen an opportunity to go deep into her character’s grief, and the actress didn’t back away from the challenge. In the scene where an ultrasound revealed that Scarlett’s daughter’s heart had stopped, Bowen gave herself over completely to the expectant mother’s grief, sobbing unintelligibly as reality set in. We were impressed by how she then found other angles on that sense of disappointment and loss, giving Scarlett a wearily comedic moment of lightness during her talk with Jessie, then having her emerge a raw yet hopeful survivor for the performance at the benefit. If you weren’t rubbing at your eyes by the time Bowen crooned that sweetly melancholy ballad, you’re a stronger person than we are. 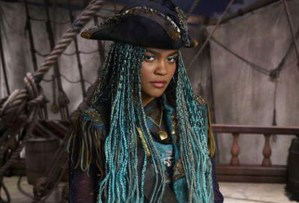 HONORABLE MENTION | From the moment China Anne McClain’s braided blue mane showed up in the premiere of Descendants 2, the Disney Channel original movie belonged to her. A triple threat in every sense of the word, McClain’s Uma — daughter of The Little Mermaid‘s Ursula — sang, danced and swashbuckled her way past the rest of the film’s ensemble of junior villains. Whether she was crooning one of her infectious tunes (“What’s My Name” is a jam, for the record) or serving up a sassy comeback, McClain owned every second of her time on screen. The film’s ending alluded to more Uma in a potential third installment of the Descendants series, but we’d prefer an Uma-centric spinoff, to be honest.